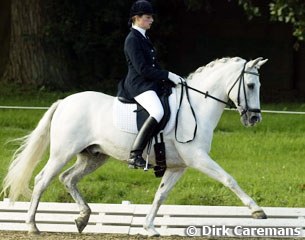 The FEI website has posted the new FEI Pony Measurement Rules, which were discussed in the November 2006 bureau meeting. The most important rule changes are the abolition of the measurement certificates, the measuring of ponies at CDI-P and CH-EU-P shows

, and the newly allowed margin for measured ponies.

Nici Kennedy, head of the FEI pony riders division, told Eurodressage that, "NFs have already been informed that the measurement certificates are no longer in place as of January 1st 2007 and that measurement at the CH-EU-P will be obligatory for all ponies as of 2007. As stated in the latest mail addressed to all NF in December the only further changes to the rules refer to the actual procedure surrounding measurement at competitions: notably the CH-EU-P."

The FEI decided to keep the FEI definition of a pony unchanged (a pony can be no taller than 148 centimeters without shoes). However, the FEI did decide to incorporate a "margin" of at least TWO centimeters when measuring ponies at international shows!! This means that, in the end, ponies can stand 151 cm (with shoes) and still be considered a pony.

Nici Kennedy explained that, "following scientific advice, we have, however, taken into consideration the fact that measuring ponies at competition creates a different set of circumstances which may lead to fluctuation in height and following much consultation with the relevant technical committees we have allowed for a margin of 2cm."

Nevertheless, the FEI is taking a big step forward in the improvement of the international sport, by abolishing the measurement certificates which were often corrupted by national veterinarians who signed the documents. Also, measuring at international events will make sure that pony sport is being conducted with ponies and not horses. This will make the sport fairer to the children.

2. All ponies must be in possession of a valid FEI passport.

3. All ponies competing at the CH-EU-P will be measured on site before the competition. Random testing at various CIP may also take place.

4. The FEI definition of a pony is in accordance with Article 3103.1. Nevertheless, to allow for the fact that FEI pony measurement takes place under competition conditions ponies measured at competition must not exceed 150cm without shoes or 151cm with shoes in order to be permitted to compete.

5. The Veterinary Regulations of the FEI apply to ponies and should be referred to for all veterinary matters including vaccinations, identification and medication control.

6. Regarding Veterinary Examinations, Inspections, etc., please refer to Annex D of this Rule-Book.

1. Measurement of ponies at FEI Events and Championships can only be conducted by a designated Measuring Veterinarian appointed by the FEI and working under instruction of the FEI. Their independence and freedom from conflict of interest must be assured in each case.

2. The Organising Committee must ensure that a suitable smooth and level area at least 3 meters by 1 meter is available at the place of measurement, free from avoidable disturbances and distractions which may unsettle the pony. This will be verified by the Technical Delegate in consultation with the Veterinary Delegate.

3. It is the responsibility of the owner, and in his interest, to ensure that the pony is well handled, accustomed to the application of a measuring stick, and correctly prepared for measurement.

4. The Measuring Veterinarian(s) carrying out the measurement must identify the pony against its FEI passport (or its national passport which has been approved by the FEI). This will be done as the pony is given time to relax.

5. The pony must either have all four shoes removed and the feet correctly prepared and balanced as for shoeing, with the wall taken down level with the bearing edge of the sole, or be shod.

6. A pony must be presented for measurement in either a head collar without a bit or in a
bridle with a bit.

7. The pony should be handled quietly and allowed to relax before measurement is attempted.

8. In the interest of safety no more than two people may accompany the pony to
measurement (this may include, owner, rider, Chef d’Equipe, team veterinarian or groom).

9. Any parties impeding the work of the FEI measurement officials or failing to co-operate may be asked to leave the measurement area. The FEI measuring veterinarians may refuse to measure a pony in the event of parties interfering with or obstructing their work.

11. The pony’s head must be in its natural upright position.

12. The measurement must be taken at the highest point of the withers (i.e. immediately above the spinous process of the 5th thoracic vertebra) which should be identified by palpation if necessary and marked before any measurements are made. The FEI measuring veterinarians may refuse to measure a pony whose withers show signs of having been interfered with.

13. The veterinarian carrying out the measurement has the responsibility that the stick he uses is an accurate one. The stick must be fitted with a spirit level and must be shod with metal. A laser device can also be used.

14. Each pony will be measured in succession by two FEI Measuring veterinarians. Should the two measurements differ, the lower of the two heights will be taken as definitive and no further measurement will take place at the competition.

15. At the time of measurement, the physical condition of the pony must, in the opinion of the Measuring Veterinarian, be such that the pony is fit to compete. If the pony on presentation to the veterinarian shall in his/her opinion be unfit to be measured for any reason, or present evidence of improper preparation, the owner shall be informed that the pony cannot be measured and therefore cannot participate in the competition.

16. If a measuring veterinarian is unable to measure a pony, the owner may request that the pony present for re-measurement. A maximum of one further attempt at measurement may be carried out. This will be carried out by the same FEI veterinarian and the pony must be represented for measurement within a maximum time of 1 hour of the initial measurement. The pony must be accompanied to a holding paddock by an FEI steward for the duration of this waiting period. The pony may be ridden during this period. Should the pony be unfit to be measured a second time for any reason the owner shall be informed that the pony cannot be measured and therefore cannot participate in the competition. The veterinarian’s decision as to fitness and preparation for measurement shall be final.

18. It is the responsibility of the President of the Ground Jury to ensure that any pony failing to pass the FEI measurement is not allowed to start in the competition.

With the exception of his fellow FEI veterinarians on site the FEI Measuring Veterinarian is
not at liberty to discuss the details taken to complete this checklist.