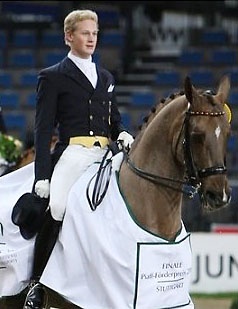 After winning the first two Piaff Forderpreis qualifiers in Bad Salzuflen and Wiesbaden, Matthias Alexander Rath has continued to dominate the circuit by winning the Finals at the 2006 CDI Stuttgart as well.

Aboard the 15-year-old chestnut gelding Renoir Unicef – a team world champion in 2002 under Rath’s stepmother Ann Kathrin Linsenhoff – the 22-year-old Matthias took the top spot in the Piaff Forderpreis Grand Prix finals with 69.083%.

“The season’s target was to participate here in Stuttgart and finish ahead of the rest,” Rath confessed. “And now I’m very happy with the way things have turned out in spite of making a mistake in the single tempi changes.”

Rath's expectations for the Finals were quite high. “You obviously put yourself under pressure when you say to yourself – you also hear it from others – you can’t fail, you need to be successful on a horse like Renoir. When things do actually work out in the end then it’s all the more nicer.”

However, he admitted, the final ranking was a very close run affair as Benjamin Werndl took second place on the twelve-year-old gelding Sam just one point behind the winning pair. “That was a top competition, better than last year. Marks of over 69 per cent are of a top international standard,” said an excited Show Director Gotthilf Riexinger after the final. 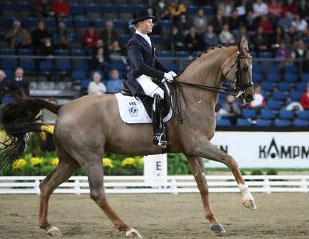 Though overjoyed, Rath immediately contributed a big part of the praise to his stepmom: “I’d like to say a special thanks to my step mother Ann Kathrin Linsenhoff. I probably wouldn’t be here if she hadn’t allowed me to ride Renoir a year ago.”

His father Klaus-Martin Rath, who was given the award for the coach of the winning pair, was also explicitly thanked by Rath junior. “He coaches me every day at home, he focuses me and he knows me inside out. This wouldn’t have been possible without him.”

On behalf of his riding colleagues the youngster paid a special tribute to Klaus Rheinberger, the Chairman of the Liselott Schindling Foundation for the Development of Dressage. ”The dressage series is a fantastic chance for us to ride in Grand Prix classes without having to compete against the top seven in Germany. Without this series it would have hardly been possible for any of us to ride in Stuttgart.”