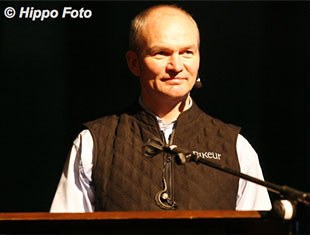 The first speaker was German Olympic team rider Hubertus Schmidt. He is one of the most prolific dressage trainers in the world, having trained over thirty horses to Grand Prix level. Schmidt stated that he rides according to the classical system of the “Skala der Ausbildung”

which was created by the cavalry and “which is still up-to-date now.”

To Schmidt the warm up is highly important, as he rides his horses long and deep to get them loose, supple and relaxed in the head. Afterwards, he develops the ‘schwung’; the swinging of the horse, engaged from behind and swinging through the back. “The horse needs to swing on the straight lines, but also on the bent lines,” he emphasized. When the schwung is established, Hubertus starts doing the collected work. 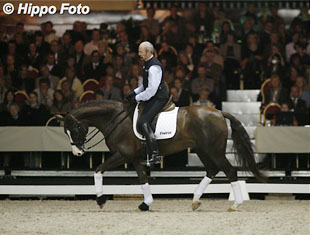 To demonstrate his theory, Schmidt rode Dr. Cesar Parra’s 7-year old Westfalian gelding Fürst Fabio (by Fidermark x Worldchamp). The chestnut is a very sensitive, hot horse and Hubertus made sure that he stayed relaxed at all times by preventing him to push up his neck. Hubertus verbalized all the minimal, almost invisible aids he gave to the horse by explaining what he was doing and why he did it. For instance, to get the shoulder free, Schmidt rode shoulder-in and half passes to make the horse move through the shoulder and to develop the trot.

He trained the pirouette not by riding travers, but by doing shoulder in “because the horse always wants to bring the hind legs in.” Every bit of collected work was followed by a forward moment via a medium or extended gait. Fabio sometimes got hot for the flying changes. “I don’t mind that as long as he stays with me. When he’s too hot or too crooked, then I don’t do the flying change,” Schmidt said. 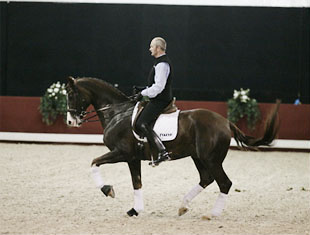 At the end of the session, Schmidt showed a few baby steps of piaffe and passage. Fabio is an extremely elastic horse so he can do the passage very easily just by slowing him down. At the forum, it was only the second time that Schmidt rode a passage on Fabio, but the horse showed immense talent for the movement.

Hubertus also confessed that he likes to train piaffe in the saddle instead of in-hand. He prefers the use of the whip to the leg for piaffe. “I use the whip more than spurs because I can make him quicker with the whip. With your legs, you push the hindlegs too much under and young horses can’t hold it. It’s much better with the whip.” Schmidt applies light, quick taps to stimulate the activity. He also added that some horses get scared from the trainer because of doing too much in-hand piaffe. The few steps of piaffe that Fabio showed were breath taking.

Schmidt got off his horse and faced a discussion panel which bestowed much praise upon his soft way of riding and on the world class qualities of Furst Fabio. “This is the best horse I have ever seen. I am envious,” five-time Olympian Kyra Kyrklund said. Stephen Clarke cleverly remarked that “top riders take if for granted that a horse is 100% in front of the aids, but amateurs can’t get there because the horse is behind the leg.” Schmidt replied that “a rider who is not so talented can still do a nice warm up.” 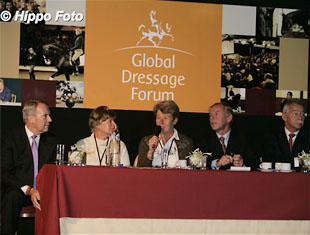 The necessity of riding a hot horse for top level dressage was also touched upon. Schmidt stated that you need ‘positive tension’ to develop a good piaffe and passage, but hot horses are often not suitable for amateurs. Johann Hinnemann commented that Fabio can be compared with a Ferrari. “Don’t buy a Ferrari for your clients. This is a Ferrari.” Furthermore, it was noted that Fabio intermittently grinded his teeth in moments of slight tension. The audience wanted to know how judges react to grinding. O-judge Clarke replied, “We don’t want swooshing tails and grinding teeth when you see the horse is tense and resistant. If it is for a few moments, I can go conveniently deaf in that moment. Not with stiff horses hanging in the hand.”

In general, Hubertus Schmidt gave a demo with a beautiful, harmonious ride one could hardly contest. By using the classical principles of dressage, Schmidt was able to present Furst Fabio as a happy athlete. He did make it look all very easy, but that is why he is considered a grand master of dressage.