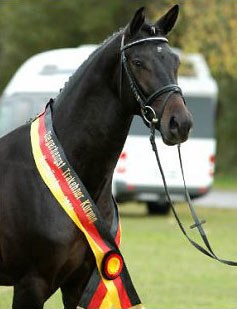 The dark bay stallion Songline became the champion of the 2006 Trakehner Stallion Licensing in Neumunster, Germany, October 29, 2006. Bred and owned by Gestut Hamelschenburg in Emmerthal, Germany, Songline is by Summertime out of Schwalbenspiel

At the auction following the stallion licensing, Songline sold for the top price of 320,000 euro to Gustav Schickedanz from Canada. Schickedanz is a German but he moved to Canada 56 years ago where he manages a thoroughbred breeding farm. Songline will be standing at stud at the station of the Poll family in Germany.

The reserve champion of the licensing was Donaugold, a chestnut colt by Distelzar out of Donaufurstin (by Sokrates). He is bred and owned by Gudrun Wahler and sold to Sarah and Tony Pidgley for 100,000 euro.

At the 2006 Trakehner Licensing, 18 stallions got licensed and 24 did not get licensed. 16 licensed stallions were sold at auction and they achieved an average price of 55,800 euro.