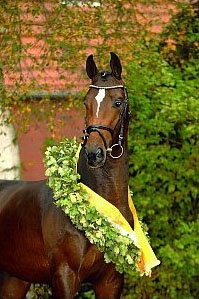 Bred by the brothers Schmoldt from Oederquart and presented by dressage rider Hans-Peter Mohr, this dark bay stallion (stallion name: Lauda) dazzled the crowds and judges with his quality paces and correct conformation. The winner sold at auction for 230,000 euro to Gestut Sprehe.

The show jumping Licensing Champion was the Stakkato x Graf Grannus offspring, bred by Alfred Bronnenmann and presented by Antonius Schulze-Averdiek. This horse sold at auction for 65,000 euro to the Czech Republic.

The young stallion crop of 2004 was of decent quality but not as good as the collection of licensed stallions presented in Verden last year. 824 Hanoverian colts were presented at the pre-selection and 103 stallions participated in the 2006 Hanoverian Licensing. 65 of the got licensed, 38 did not get licensed.

Fifteen stallions were selected for the premium ring. The reserve champion was the bay stallion by Conteur out of SPS Windsbraut (by Weltmeyer). Bred by Achim Giesecke-Bulle and presented by Heinz Katt, this young stallion was purchased by Emma Hindle's Brookhouse Stud for 300,000 euro.