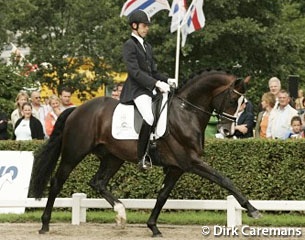 2005 Pavo Cup Champions Hans Peter Minderhoud and Uptown have taken a firm lead in the 2006 Pavo Cup Finals. Minderhoud and the KWPN licensed Uptown (Kennedy x Ubis) won the semi-finals yesterday at the KWPN Paardendagen in Ermelo with 87.5 points.

The finals are Thursday August 17, 2006. The final round is in the morning and the top six will be test ridden in the afternoon by guest test riders Stefan van Ingelgem (BEL) and Heather Blitz (USA). They will decide which horses become the new Pavo Cup Champions.

Vivaldo In the Lead in the 2006 Pavo Cup Finals 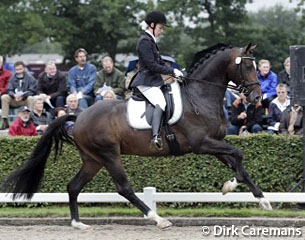 The KWPN licensed stallion Vivaldo was victorious in the semi-finals of the 2006 Pavo Cup Finals, which take place at the KWPN Paardendagen in Ermelo, The Netherlands, this week. Under Mirelle van Kemenade, the 4-year old Vivaldo (by Polansky x Montecristo) scored the highest mark of 85,5 points in the semi-finals.

"We've seen a very nice group of horses. There wasn't one highlight, but a really good top group. It'll be a neck-to-neck race for the victory," judge Jespers told KWPN.