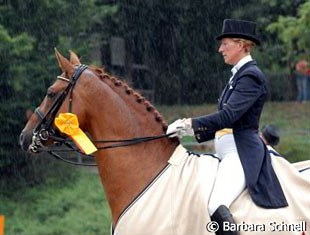 Heike Kemmer was victorious at the 2006 German Dressage Championships. Making her come back with Bonaparte, who was injured for a long time, Kemmer immediately rose to the top and claimed the national title.

Nadine Capellmann and Elvis VA were not scoring the way they had hoped for.  "It wasn't a good day for horse and rider," said Nadine Capellmann about her performance in the Grand Prix on Friday, where she and Elvis scored only 71%. As a consequence, she parted from Martin Schaudt, who had been her coach for the past year. "At the moment, there's just no consensus between us regarding the training", Capellmann said, annopuncing at a press conference in Muenster that for the time being, Holger Schmezer would coach her and her talented youngster. "He already helped me today", she said after the Special, where she scored 73,76%, "and I'm finding back to my style. The Piaffe wasn't as good yet as Elvis can do it, but we're on the right way now." 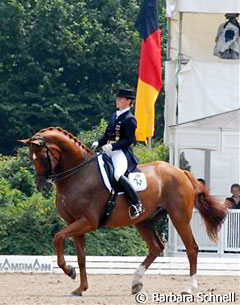 Isabell Werth and Warum Nicht FRH were on a high. "I feel like now I'm being rewarded for all those years", Werth said. "I've always believed in those horses; my sponsor Madeleine Winter-Schulze has always believed in me, and now it all pays off. I'm simply very, very happy that it's going so well now, and I hope that it'll stay that way."

Both Warum nicht and Satchmo performed well, and it doesn't only appear to be a given that she'll be on the German team for the WEG -- she and Holger Schmezer will even have a hard time deciding which horse she'll take along. For Werth, the way back to the top was the longest, and I she probably was _the_ happiest of all the happy persons there this weekend.

The results for Isabell's ride are announced -- 82%, the silver medal. Upon hearing this Werth dismounts and falls into her sponsor's arms ... while "Hannes" stood there as if forgotten.

Prints of Barbara's Munster photos can be ordered via her website. Email Barbara if you want to buy photos for editorial or personal use.