Epikur In Training with Martin Schaudt 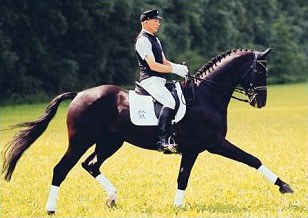 German A-team rider Martin Schaudt has a new promising dressage horse in training. Schaudt got the ride over the 10-year old Hanoverian stallion Epikur, who was previously trained to S-level in Germany by Frank Bauer.

Epikur is by Espri out of the State Premium Mare Wariness (by Weltmeyer x Lemon xx). He is bred by Gerhard Finck from Padingbuttel, Germany. He scored well in his stallion performance test placing 8th overall with a dressage index of 133.6 points. Hannes Baumgart presented Epikur as a youngster in the riding horse tests.

Epikur is one of the most used sires in the Baden Wurttemberg area (South West Germany) and has one licensed son, Electric, standing at stud in Denmark. He stood at stud at the Landgestut of Marbach.