Creech and Devon L Qualified for the 2006 WCYH Verden 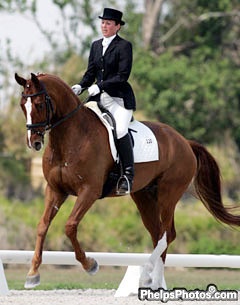 Creech will be competing in the six-year-old division with the 16.3hh Hanoverian gelding Devon L, owned by Doug and Louise Leatherdale. Bred at Leatherdale Farms, Devon L is by De Niro out of Elite Mare Wibranda (Wolkenstein II x Maurice x Pik König).

In 2005, Creech and Devon L rode to the 2005 Canadian FEI Five-Year-Old Championship title. Their 2006 competition season include wins in the FEI Six-Year-Old Division in Florida with scores above 80%. A flashy horse in appearance, Devon L is regularly rewarded for his three solid gaits which are highlighted by a phenomenal canter.

Creech herself has demonstrated much success in the FEI Young Horse classes, having expertly guided a number of horses from these classes onto successful careers in the Advanced division.

To prepare for the Championships, Creech & Devon L will be travelling early to Germany in order to work with Canadian international team coach Norbert van Laak.