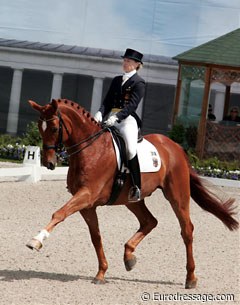 With 38 of the world's best dressage riders in the world nominated to compete in the CDIO leg of the CHIO Aachen, the CDIO Grand Prix on Thursday May 18, 2006, promised to be a very exciting one.

Unfortunately, Holland was not represented by its strongest riders as the Dutch are preparing themselves to compete in their national championships next weekend, but that didn't mean Aachen was less interesting.

German Chef d'Equipe Holger Schmezer selected Nadine Capellmann with her phenomenal Elvis VA for the first time on the team. Elvis made his Aachen debut already last year, showing unlimited potential in the CDI leg. This year, he got to chance to prove his worth in the CDIO division and his possible value for the German World Equestrian Games' team. And yes, Capellmann did live up to the expectations.

Despite a mistake in the single tempi changes, she scored 75.833% and won the Grand Prix. Elvis improved considerably since last year. He's more confirmed in the movements, can stay uphill longer and looks more reliable in the ring. The piaffe is still his weakness, as he tends to go deep and loose rhythm, and the tempi changes can be more ground covering, but Elvis' passage is simply extraterrestrial. He displays such power, suppleness and relaxation in this highly collective gait, it simply takes your breath away.

If this horse can consolidate the FEI movements and settle down in them, there will be no limit to Nadine and Elvis! Already scoring 9s and 10s for the trot extensions and passage, Elvis can use his 9 + scoring basic gaits as stepping stone to more magical scores. 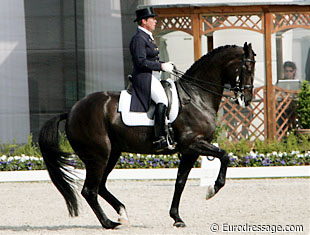 That Elvis was floating on top was no surprise, but that Finnish Kyra Kyrklund came so close to their winning mark was remarkable. Aboard the Swedish warmblood gelding Max, Kyrklund beat Capellmann on technical marks (after her final halt and salute, she scored higher that Nadine), but in her collectives, the judges pushed her overall mark down keeping her from the lead. With 75. 542%, Kyrklund was 0.42 % points short of a win.

No horse sits more in the piaffe than the liver chestnut Max. The first transition into the piaffe was a bit hesitant, but once he gets the rhythm going, Max becomes a textbook example.

The extensions could show more power, but they had good overtrack. The half passes were a delight, as well as the pirouettes. Even the tempi changes were executed straighter than one year ago. Kyrklund definitely rose to the occasion and has shown that she's vying for an individual medal at the upcoming World Equestrian Games.

Reserve World Cup Champions 2006, Isabell Werth and Warum Nicht FRH, landed a third place in the Grand Prix with 74.833%. The enterance into the first piaffe was messy and the piaffe was not on its place. They still scored 6's and 7's for it. The in and out of the second piaffe was a bit cluttery too. The final change in the two tempi's was short.

The extended trots, however, were outstanding as well as the single tempi changes. The final piaffe and passage on the center line were excellent. 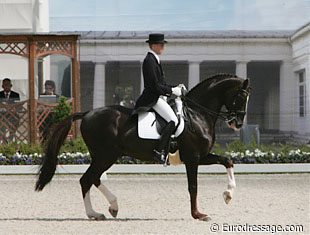 A fourth place went to Danish Andreas Helgstrand and the Oldenburg stallion Blue Hors Don Schufro (73.417%). Schufro has been promoted as Andreas' number one mount, while Cavan can take it a bit more easy now competitionwise, being at a "riper" age.

Helgstrand and Don Schufro are a pleasure to watch, especially in the piaffe and passage tour. His passage is light, elevated and beautiful. The judges generally scored it 7 but it could have easily been an 8 or a 9. The flaws in the test were the pirouette right and the one tempi changes which could have covered more ground.

Swiss Silvia Ikle has been showing her Salieri CH very sparingly this show season and it was good to see the combination in action again at Aachen. They scored 72.083% and placed fifth. Salieri CH is incredibly light in the hand, stays very well in the frame throughout the test and has a lovely piaffe and passage.

Their Aachen Grand Prix ride, however, was a bit bland. The extended trots failed at coming to full expression and the pirouettes were so-so. Linda Zang scored the pair 69.370% which was a better point reflection of Iklé's Grand Prix performance in Aachen that day.

Good progress has been made by Ann Kathrin Linsenhoff and Sterntaler Unicef (by Sion). The bay Oldenburg gelding has gained more muscles and doesn't look so edgy anymore. His haunches are more filled up as well as his neck. 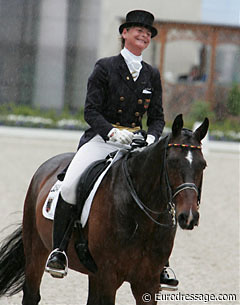 In the Grand Prix, Linsenhoff was able to stay more focused, and therefore made less mistakes than usual. The first piaffe didn't have enough steps though and the in and out of the second piaffe was very careful. The passage was lovely, elevated. Sterntaler fell over the shoulder in the zig zag to the left and he did not cover enough ground in the one tempi changes. But these are nitpicky things. The trot extensions were fabulous, the walk outstanding. Only the final piaffe were he jumped together behind (as if he cantered) was a serious boo boo, but Linsenhoff still scored 5s and 6's for that. Their total score was 71.708%

It's unusual to see Jan Brink and his Swedish stallion Bjorsells Briar ranked in seventh place. He's usually all the way up there at the top, but a mistake frought Grand Prix test reduced their score to 71.500%.

In the first extended trot there was a mistake in the rhythm, but the trot half passes that followed were superb. The piaffe and passage were outstanding, but major mistakes crept into the test in the canter tour. The first change in the zig zag was short, then there were several hiccups in the two tempi's and Briar changed too often at X in between the pirouettes. Despite these errors, Briar looked fresh and happy.

From silver medallist at the 2005 European Dressage Championships to 'only' fourth member of the German Dressage Team. Quite a change for Hubertus Schmidt in one year time. It means that newer and better German combinations have come along and just like two years ago running up to the Olympic Games, Schmidt will have to fight again to get a position on the team. 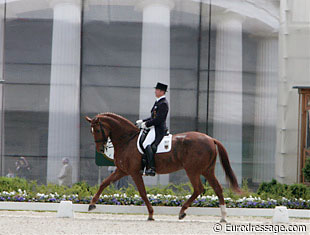 In Aachen, Wansuela stood out with her harmonious piaffe and passage and she showed the best zig zag of all horses in the Grand Prix. The extended trots remain a critical issue, her being fragile behind, and her walk shows no overtrack despite it being relaxed. They scored 71.375% and placed eight.

The CDIO Aachen is one of only a few shows a year where a nations' cup for dressage is being organised. Hickstead and Rotterdam are usually the other two and Saumur dropped out this year as CDIO.

With Holland's A-team not travelling to Aachen, Germany had free reign to win the Aachen CDIO. Denmark placed second with Andreas Helgstrand as anchor rider and Fie Skarsoe, Joachim Thomsen (pictured) and Anders Dahl as back up. The Swedish team placed third.

For Thomsen, his trip down south has been one big trill. He packed his bags (and horse) to compete at the CDI Hansbeke, not expecting to be selected for the CDIO Aachen and CDI Wiesbaden the next few weeks. "Only brought clothes for one week and didn't even bring a suit. I couldn't even get decently dressed for the Aachen Media Night we went to with the team," Thomsen joked.

Holland ended up on an unusual fifth place but did have a few great rides. Edward Gal and Gribaldi were the top performing combination with a 71.250% score and 9th place, but it was especially interesting to see the progress Kirsten Beckers made on Broere Montecristo (pictured).

Montecristo (El Corona x Clavecimbel) was nicely up in the frame. He used to go behind the vertical all the time and lose his power at the end of the ride, but in Aachen, Beckers had him up and going. They scored 68.833% and placed sixteenth.

New comer on the Swedish team was Per Sandgaard and Memphis. Sandgaard, originally a Dane and member of the Danish Olympic team, married his Swedish partner Peter Markne and took up the Swedish nationality. 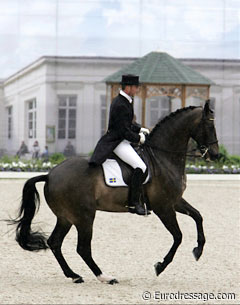 After the sale of Zancor, Sandgaard got the ride over Memphis (by Larome), a wonderful bay gelding with much talent and potential. The first extended trot and half pass to the left was a bit runny but they got more collected and together in the half pass right and second extended trot. The passage is lovely, but could be more engaged behind; in the piaffe the bay gelding lowers the haunches nicely and sits in the collection. Two mistakes in the two tempi's were critical for their overall score of 67.583%.

The British team was not on full force in Aachen either giving two new combinations the chance to proliferate themselves in a top notch international field. Sandy Phillips and Lara lived up to the expectations and scored 67.792%. Lara started her international career as a show horse in Aachen, selling their in the CHIO Sales for 300,000 DM (150,000 euro) to Ann Kathrin Ehlen who later competed her in the World Young Horse Championships. Davison and Hiscox Karachi were the drop score with too many mistakes in their test.

Anchor rider for the Brits remains to be Emma Hindle on Lancet (pictured). Currently ranked number one in Britain in the GP rankings, Hindle had a great ride in Aachen. They put down safe piaffes, outstanding passages and fantastic half passes. Lancet was also much better in the frame, more up and his nose more forward. A miss in the one tempi's kept the score from hitting over 70%. They got 69.333% and placed 13th.

The Spanish dressage quartet has been cruising through Europe getting show experience prior to Aachen. Three of four Spanish team members (Mellado, Cruces Fernandez, Lopez Porras) are young rising stars who are gradually improving their scores show after show.

Leader of the pack is, however, Ignacio Rambla, multiple team member and Olympian. Aboard Distinguido, he got the highest score for Spain (69.042% - 14th). The Andalusion stallion and Kyrklund's Max showed the best piaffe in the Grand Prix in Aachen. Relaxed, rhythmic, sitting; true eyecandy.

Back to the 2006 CDIO Aachen index