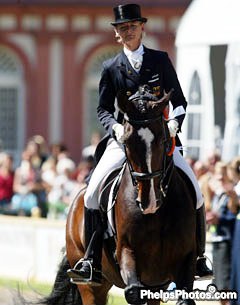 Several major changes have taken place in the organisation of Ann Kathrin Linsenhoff's stable in Kronberg, Germany. Horses switched owners, switched riders, and new ones have been acquired by Linsenhoff, who is a German Grand Prix team member.

Her Prix St Georges gelding Dideldudeldo Punkt has been sold to Ulrich Kasselmann of the PSI Stables in Hagen, Germany. In exchange, Linsenhoff got three new PSI horses: the 6-year old Westfalian gelding Fitou E (by Fleurop x Ehrentusch) through a private transaction and Triviant (Olivi x Saluut) and Welterfolg (Welt Hit I x Cagliostro xx) for officially 920,000 euro through the 2005 P.S.I. Auction in December.

Linsenhoff's 2002 World Equestrian Games mount Renoir Unicef (by Rubinstein) will be competed by her stepson Matthias Alexander Rath in the future. In 2006, Rath will become a senior dressage rider and he is moving up the ranks to Grand Prix level. Renoir will be his partner. Another one of Linsenhoff's youngsters, Sting (Sandro Hit x Alcatraz) is currently in training with Holga Finken, who's preparing him for the Bundeschampionate.