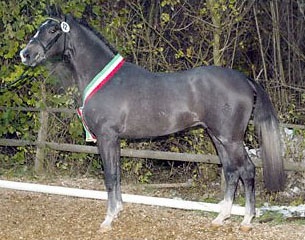 It doesn't happen very often that a show jumping stallion prospect becomes the grand champion of a licensing, but this year in Munster it happened.

A delightful, superbly jumping dapple grey colt by Cornet Obolensky x Acobat x Cantus became Champion of the 2005 Westfalian Stallion Licensing in Munster which took place November 28-30, 2005. Outclassing his dressage gifted competitors, this young stallion named Cornado was not only a class act jumper, but he also moved well despite his jumper genes. He was presented by Antonius Schulze-Averdiek and will be up for stud at the Landsgestut Warendorf.

The reserve champion of the licensing was Rock for Ever, a Rockwell x Landstreicher x Damokles offspring presented by Heinz and Ralf Könemann. This bay stallion showed top class gaits and a super behaviour throughout the three licensing days. With his quality, he could easily have won the title of champion. Rock for Ever will be up for stud at Holkenbrink's stallion station in Munster-Albachten.

The second reserve champion was an outstanding Florestan x Delphi x Feuerschein offspring presented by Michaela Otte-Habenicht. This long legged pitch black stallion showed top class dynamics in his movements with a super engaged hind leg. This Florestan has dressage written all over his body and has, therefore, been purchased by Gestut Sprehe as successor for Furst Heinrich in the private sale following the licensing. Holga Finken will be training this future dressage star.

At the 2005 Westfalian Stallion Licensing, 46 stallions were licensed of which 16 received the premium status.