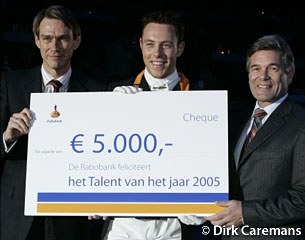 Twenty-three year old Laurens van Lieren has been named the Rabobank Talent of the Year 2005 at the World Cup Qualifier in Maastricht, The Netherlands, on Saturday November 26, 2005.

Van Lieren was member of the Dutch Grand Prix team and contributed to the silver team medal at the 2005 European Dressage Championships in Hagen. He also claimed a first place with the Dutch team at the CDIO Aachen and finished third at the 2005 Dutch Dressage Championships in Nijmegen. Van Lieren works at Stable Zegwaard in Rijswijk and rides the 10-year old Dutch warmblood Hexagon's Olright (by Rubiquil x El Corona), who is owned by Wim Zegwaard and Laurens' father Leunis van Lieren.

Van Lieren seemed very surprised when he was named "Rabo Talent of the Year" but has been, without a doubt, the biggest rising young dressage star in The Netherlands this year. He received a cheque of 5,000 euro which he can spend freely on improving his dressage career.