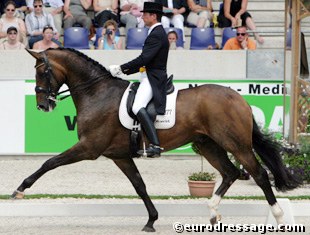 The German equestrian magazine Reiterjournal reported that German Olympic team rider Martin Schaudt might move from his current barn in Ontsmettingen, Germany, to another location in Germany.

Reiterjournal stated that Schaudt, who is the world record holder in the Grand Prix Special, might move into Nadine Capellmann's barn in Wurselen, Germany, or the pair might look for a new yard, where they can live and work together.

Martin's spokesman Wolfgang Leiss, however, denies this news. "They reported too soon on it, because at the moment nothing is concrete. Both Nadine and Martin are thinking about a future together, as they are a couple now. At the moment, however, their riding careers and the preparation for the European Championships in Moscow are their priority. All the rest will have to wait," Less told Eurodressage.

Martin Schaudt is the leading German dressage rider with his Hanoverian Weltall VA, while Nadine Capellmann is betting on the 14-year old Zancor to make it onto the German Dressage team for Moscow.