Florencio EVA Positive and Partly Sold to the Bosch Brothers 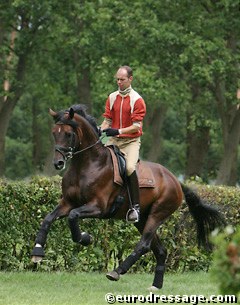 because of a breeding accident, Nijhof stated at that time. Since then the rumour floated in Europe that the stallion was EVA positive and suffered from fever attacks because of that. Dutch equestrian journalist Karin de Haan finally got the Florencio's EVA positive status officially confirmed through Nijhof.

And there is more Florencio news. Paul Schockemohle eventually did not purchase half of Florencio, but Nijhof sold 1/3 to the Bosch brothers in The Netherlands. This means that Florencio is now completely Dutch owned.

At the World Championships, Florencio was owned by two Dutch horse owners, Eugene Reesink and Henk Nijhof. Reesink sold his half of Florencio to Paul Schockemohle right after the Championships, but the deal was never finalised. Nijhof then became full owner of Florencio. Last week, he sold 1/3 of the ownership to the Bosch brothers from Luttenberg, The Netherlands. Hans Peter Minderhoud will remain Florencio's rider.

At the 2005 KWPN Stallion Licensing begin February 2005, Florencio was approved for the KWPN verband. During the veterinary examination, it became clear that Florencio was EVA positive. The stallion is treated for this disease in Germany and if all goes well, his fresh semen will be available again in May. 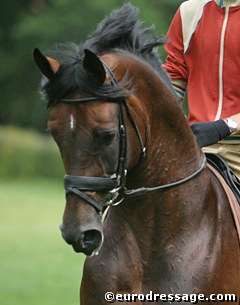 EVA does not affect the quality of the semen. Florencio's sperm report at the University of Utrecht proved to be excellent with a morfology of 85.29% and a TNB of 9401!

Because of Florencio's EVA status, he will performance tested for the KWPN verband in the autumn. Florencio was bred to approximately 500 mares in 2004 and foals are expected in Germany, Holland, England and Sweden.