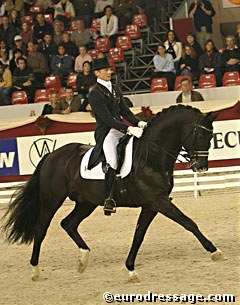 The black Trakehner stallion Gribaldi has been proclaimed keur by the KWPN verband. The 11-year old Gribaldi is by Kostolany x Ibikus and is bred by Marika Werner from Mittenaar, Germany.

Dutch stallion owners Mr. de Jong and Joop van Uytert purchased the black at the 1995 Trakehner Licesing in Neumunster as a 2,5-year old. Gribaldi has been standing at stud in The Netherlands his entire life and is also approved for the KWPN verband, Oldenburg verband and Danish Warmblood society.

Based on the performance of Gribaldi's 6- and 7-year old offspring, the KWPN decided to proclaim Gribaldi Keur Stallion. "Gribaldi is our first licensed stallion and now based on his offspring he has become Keur. What a great honour," Van Uytert said.

In order to become a KWPN Keur stallion, a sire has to have a sport index of more than 140 points with a reliability of 75%, and his quality conformation has to be passed on to the offspring.

Under Dutch team rider Edward Gal, Gribaldi has become an international successful Grand Prix dressage horse. The combination won the 2004 Zwolle International Stallion Show kur to Music with 73.70% and the CHIO Rotterdam kur to music. Their most recent performance was at the CDI-W Mechelen