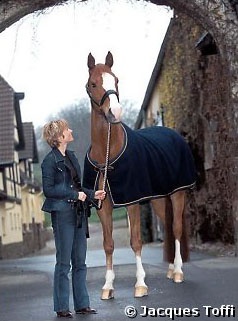 Unfortunately, in the recovery box Farbenfroh sustained a femoral neck fracture when he tried to stand up. The fracture was so severe he had to be put down.

"I'm devastated," Capellmann said, "a horse like Farbenfroh you only find once in your life. Everything on him was extraordinary. His looks, his talent, his unbelievably nice face."

The double gold medal in Jerez was Capellmann's absolute highlight in her career so far. Broadcast on television were the unforgettable images of Capellmann hugging her horse in tears, saying "you are the best, you are the best."

Farbenfroh was known for living on the edge of madness and genius. One day the horse could be phenomenal, the other he refused to go or spooked in the arena. After the 2002 World Equestrian Games, Farbenfroh injured himself and was unable to recover fully. He tried to make a come back in the spring of 2004, but was unable to rise to the same level of excellence as of the years before.