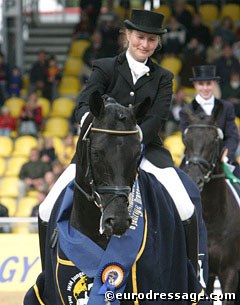 When you have won so many titles already: three times Regional Champion, one time German Champion and once bronze medallist at the World Championships will there come a point of saturation are is one greedy for more.

In case of Katrin Burger and FBW French Kiss more is more. Their victory in the 6-year old division at the 2004 World Championships has been the topping on the already huge cake (and the cherry is still to come at the 2004 Bundeschampionate).

In the first round Gestut Schlossäcker's Baden Wurttemberger bred stallion by Florestan x Donnerhall finished only 12th (!!) with 8,24, but he was a bit underscored in that class if one looks at the performances (and mistakes) some horses made, who ranked above him. Burger rode very fluent transitions and maintained a good rhythm throughout the test. The horse did open up his mouth once in awhile, but it wasn't very disturbing the general ride. Especially the walk was thrilling, what cadence and overtrack! The first flying change to the left, on the other hand, was a bit forced. 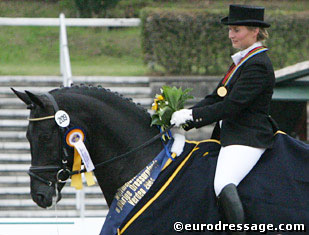 But Burger corrected the matter in the finals on Sunday, riding a correct test with a beautifully balanced trot, an outstanding walk and a ground covering canter. FBW French Kiss who has lost some baby fat now that he's 6 years old, looked in top shape, was uphill and on the vertical.

"What a nice test, the horse is loose through the body and showed three good basic gaits which were elastic. His walk is the highlight. We give it a 9.7 because you rarely see one like that. If it was a bit more active, we would have given it a 10," the judges said. FBW French Kiss scored high for all three gaits, but it was his rideability and correctness which led him to victory. An overall 9.16 made them win the 6-year old Championship with great distinction. 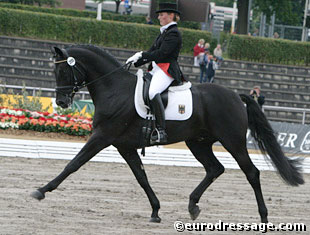 "He has shown himself at his very best," Burger said about her horse. "He won three regional championships, the stallion performance test, and so much more, but this World Champion's title is the best. It's the best show for a young horse and I want to thank my horse for this."

At the press conference, Katrin Burger did not neglect to thank the organization of the show. "The worth of an entry at this show is rising. The organization has done a great job saving the footing. They did everything to rescue it after the rain storms. Thank you for that," Burger said.