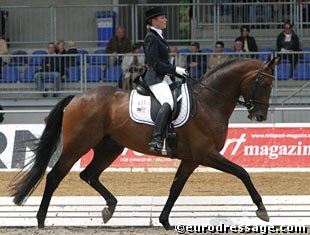 Adding a small paragraph to the history of American dressage were Susanne Owen Hassler and her Hanoverian stallion Royal Prince. With fourth place at the 2004 World Championships for Young Dressage Horses

, Susanne Hassler has been the best scoring American ever at this event.

With a wonderful ride in the finals and an even better first qualifying round, Susanne Hassler earned every single point she got from the judges' panel. In the first round, Hassler scored 8.92 overall and placed fifth. In the finals on Sunday, the pair moved up one place with a 8.84 mark. Hassler made no major mistakes in both her rides and Royal Prince, a Rohdiamant x Prince Thatch xx offspring was very obedient to the aids.

Judge Jennie Loriston-Clarke described the combination as "harmonious, elegant and in balance." In the canter Royal Prince could be more uphill and show more engagement from behind, in the trot he need to put more weight and show more action behind so that he could show more elasticity. The highlight gait was the walk which scored 9.5 for its good overtrack. Elegance and correctness predominated in Hassler's rides, even though Royal Prince could use a bit more pressure from the rider's leg so that he becomes more uphill and engaged. 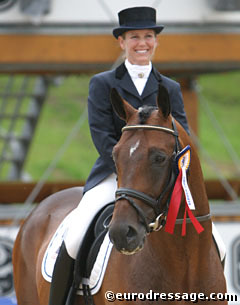 "It's such a great experience to be here," Susanne Hassler said. Her husband, Scott Hassler, who served as chef d'equipe for the American Young Horse team in Verden was also very pleased with his wifes achievements. "A bronze medal would have been great for America, but we're very happy with the fourth place. She (Susanne) wanted to have great ride and she did," Scott said.

The 5-year old Royal Prince was purchased by Hilltop Farm from Bernhard Schaerffer in the autum of 2003. He's the perfect horse for a lady rider: elegant, sensitive and abounding with talent.