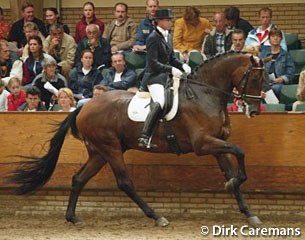 A last minute change has taken place in the Dutch KWPN camp which is travelling to the 2004 World Championships for Young Dressage Horses in Verden, Germany, July 9-11, 2004.

The KWPN gelding Stradivarius, to be competed by Leida Collins-Strijk, has been withdrawn from the competition.

The KWPN selection committee has asked the first placed reserve combination in the Dutch Young Horse Selection Trials, Angela Coppens on Garshof's Sajouti, to go to Verden to replace Stradivarius. Sajouti is a dark bay KWPN branded elite mare by elite mare by Clavecimbel x Flamingo. She will be ridden by the 17-year old junior rider Angela Coppens, who is a working student at Stoeterij Garshof.

"The decision came last minute, but we are very motivated to go," Sajouti's owner Joost Smits told Eurodressage. "We are leaving for Verden tomorrow."