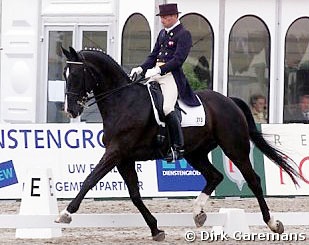 He achieved his last qualifying score at the CDI Wiesbaden, where he received 69,16% in the Grand Prix Special.

Jon Pedersen and his 18-year old veteran horse Esprit de Valdemar, a Hanoverian stallion by Espri x Woermann, are routiniers in the Danish team, having already competed for Denmark at the 1998 World Equestrian Games and 2000 Olympics Games.

Pedersen is the third rider selected for the Danish Olympic team this year, joining Andreas Helgstrand and Per Sandgaard who qualified in May. Danish team trainer Rudolf Zeilinger will select the fourth Danish team member after the CDIO Aachen. He has to pick between Anne van Olst, Lone Jorgensen and Natalie Zu Saeyn Wittgenstein. Other Danish riders can no longer qualify for the team.