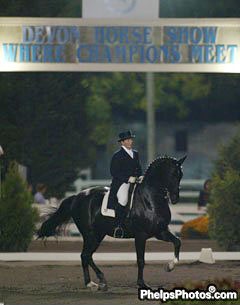 Cindy Ishoy and Proton put in stellar performances this weekend at the First leg of the Canadian Olympic Selection Trials. A packed audience of over 700 people filled the indoor arena at York Equestrian Centre in Cedar Valley Ontario in order to see one of Canada's most decorated riders perform Ishoy's new freestyle on Sunday June 21, 2004.

Although the Grand Prix freestyle is not included in the tabulations for choosing the final Canadian dressage team members, it does offer another opportunity for the contenders to sharpen their skills in front of an international judging panel while competing alongside each other before Trial # 2 in Blainville, Quebec June 30th to July 3rd.

Ishoy's freestyle began with a very demanding piaffe/passage tour which demonstrated Proton's physical strength as well as his talents, all set in perfect timing to an instrumental version of the song “Fever”. The freestyle, entitled “Criminal Intent” was put together by Shelley Brown, a member of the National Ballet of Canada Orchestra.

“He was a little nervous in the ring”, explained Ishoy “but then he settled. This was the first time performing this kur in a tight and closed environment and I'm very happy with his performance.” The judges were also happy, rewarding Ishoy with a score of 70.650% and giving the rider possibly one of the best presents for her birthday today.

Ashley Holzer, on her Dutch Warmblood stallion Imperioso, kept the competition a tight race when she rode with even more energy and brilliance in the ring than in their Grand Prix test from the previous day. Riding to music taken from various movie soundtracks, including the “Princess Bride”, Holzer showed harmony and fluidity throughout her freestyle and earned a score of 69.775% from the panel.

Rounding out the Olympic contenders in this class were two horses who are rookies to the Grand Prix ring this year after having won a Team Silver Medal at last year's Pan American Games in the Dominican Republic. Quantum Tyme, under the guidance of Evi Strasser, showed both the crowd and the judges his superb ability for canter pirouettes and finished with 68.900%. Gran Gesto, owned by Brinc Ltd. & Anne Welch and ridden by Jacqueline M. Brooks, demonstrated his own natural abilities for the Grand Prix ring, despite his relatively young age of 9 years, when he was awarded 68.075%.

Olympic Team hopeful Belinda Trussell, riding her own horse Royan II, chose to compete in the Grand Prix Speciale rather than the Freestyle. Trussell continued to build on her close second place finish to Ishoy in Friday's Grand Prix and this time delivered a personal best score of 70.120% in the Speciale.

“I'm thrilled!”, exclaimed a delighted Trussell. “He was on, I had no mistakes, and he was expressive.” The win meant even more to the rider from Stouffville, Ontario as it was a chance to perform to a hometown crowd after being in Europe since her winning performance last fall at the Royal Winter Fair in Toronto. “To come home to the (Olympic) trials and have a personal best in the Speciale is thrilling. (Royan II) was fantastic!”

Olympic focus will now shift to Blainville, Quebec where the second and final selection trial is slated for Jun 30th – July 3rd. Following this competition, the three team members will be named and join Leslie Reid & Mark on Canada's Olympic dressage team heading to Athens. Reid & Deryol Andrews' Mark have already been named to the Olympic team having earned an automatic bye earlier this year.

Dressage joins Eventing as one of only two equestrian disciplines where Canada has earned a team Olympic berth. Jumping will be sending one individual. Keep tuned to www.DressageCanada.org as the Athens Olympic countdown continues.