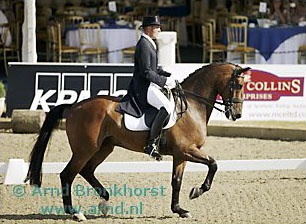 right after his big come back from another injury in March 2004. Teeuwissen and Goliath already missed two Dutch Olympic Qualifiers are not fit for the third important one at the 2004 Dutch Dressage Championships next weekend in Nijmegen, The Netherlands.

In agreement with trainer Sjef Janssen, Teeuwissen and Garritsen have decided to look realistically on the case and no longer pursue to qualify for the Olympics. This means that the pair will not compete at the Dutch Championships and probably not at the CDIO Aachen.

"Goliath is back in training now, but it would be very egoistic of me to try for another Olympics. I want to think in the best interest of my horse. I am hoping that we can come back this winter and have a bit more good fortune next year," Teeuwissen said.