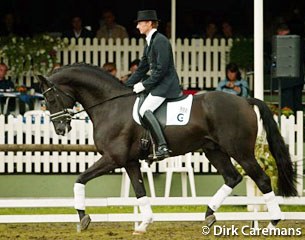 did not need to run any selection trials to compete in Verden.

Any rider ranked in the top ten of FEI/BCM World Riders' Ranking is allowed to compete a young horse in Verden. Due to his second place at the 2004 World Cup Finals and other various top placings at World Cup competitions, Edward Gal is a top ten member.

Bred by Walter Willhaus in Krummhoern, Germany, San Remo is owned by the Dutch duo Joop Van Uytert - F. Willemsen. San Remo is licensed for the Hanoverian Verband and the KWPN association. He's by Wolkentanz I out of Valente (Volturno x Azur). San Remo did his HLP test for the Hanoverian Verband in Adelheidsdorf and his HLP test for the KWPN in Ermelo. The KWPN judges gave San Remo 7 for walk, and 8 for trot and canter.

The now 5-year old San Remo made a good impression in the 2003 Pavo Cup Finals in which he finished fifth under Edward Gal. At the 2002/2003 KNHS/KWPN Stallion Competition he finished second overall at the finals in 's Hertogenbosch.