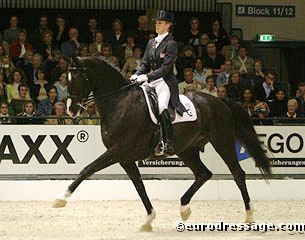 Aboard Gestion Salinero (by Salieri), Van Grunsven scored an impressive 76.54% and was far ahead of all competition. It was Salinero's first show since the 2004 World Cup Finals, but the dark bay gelding did not show any loss of routine at all. Van Grunsven captured a second place with Krack C. They got 73.38%.

Currently Holland's second best Grand Prix rider, Edward Gal confirmed his status again aboard Gestion Lingh in Kootwijk. The duo finished third with 72.79%. "Lingh wasn't as electric as he was at Ermelo. That's why I made some mistakes in the flying changes every single stride and in the pirouette," Gal explained.

Surprise ride of the day came from Imke Schellekens-Bartels. Aboard the novice Grand Prix horse Gestion Lancet (by Wenzel x Shogun xx), Schellekens scored a great break through score of 71.71% and a fourth place. "Lancet was absolutely top today," Imke said, "and I rode a personal record. I never rode more than 70% and now I even got 71.17%. It's also nice to see that all the judges were on the same wavelenght."

Sven Rothenberger and his Hanoverian gelding Barclay II (by Brentano II) landed in fifth position with a nice 70.42% mark. He defeated Marlies van Baalen who had a conservative ride on Idocus. "Idocus spooked in the warm up ring, so I schooled him a bit longer than normally. That's why he was a bit dull to the aids in the ring, but he was nice and steady to ride," Van Baalen explained. The pair received 70.29%. Alex van Silfhout and Luxform's Nimbly (by Havel) ranked seventh with 70.17%