Andreas Helgstrand and Per Sandgaard Selected for Danish Olympic Team 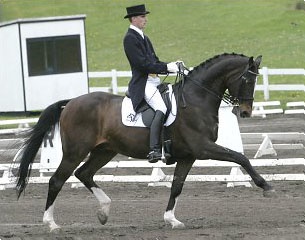 Andreas Helgstrand and Per Sandgaard are the first two Danish riders to be officially selected Danish team members for the 2004 Olympic Games in Athens.

The Danish Grand Prix riders have been competing at various CDI's in Germany in an attempt to qualify for the team. Helgstrand and Sandgaard were the first two to score above 69% in a Grand Prix or Special, which the limit set by the Danish Equestrian Federation.

26-year old Andreas Helgstrand made a flashy impression at the CDI Norten Hardenberg, where he finished third twice aboard Blue Hors Cavan (by Cavalier x Damnatz). At the CDI Wiesbaden, Helgstrand rose to the top by placing second in the Grand Prix with 73.00% and winning the Special with a phenomenal 75.72%.

The 14-year old Hanoverian gelding Cavan seems to be revitalized, fit and ready for his first Olympics. In 2000, Cavan missed the Sydney Olympics due to colic surgery. After the 2002 World Equestrian Games, his rider Lars Petersen moved to the United States and he had to deal with a severe leg injury. Those days are over now. The experienced and refreshed Cavan and the young, talented Helgstrand match perfectly.

Helgstrand is ecstatic about his Olympic qualification. "Now it's reality. I'm very happy," he said, "I can start setting up a good training schedule towards the Olympics." 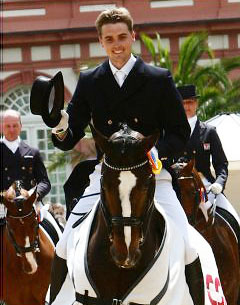 To make things even better for Helgstrand, the Blue Hors team, the Danish equestrian federation and Danish dressage enthusiasts in general, Andreas Helgstrand has qualified two horses for the Olympic Games. The 11-year old Oldenburg licensed stallion Don Schufro (Donnerhall x Pik Bube I) placed third in the Wiesbaden Grand Prix with 70.20% and scored 70,900% in the Kur to Music. At the CDI Norten Hardenberg, Don Schufro scored 69.16% in the Grand Prix and 74.025 % in the Kur to Music.

Second Danish rider qualified for the Olympic team is Per Sandgaard and his bay gelding Zancor. Sandgaard gradually worked his way up the ranking by competing at several World Cup Qualifiers in Europe, but during the 2004 outdoor season, the pair really started to shine. At the CDI in Norten Hardenberg, they won the national Grand Prix, but had a little setback in the international Grand Prix, in which they scored 63.46%. This moment of weakness was corrected at the CDI Munich, where Sandgaard finished second in the Grand Prix with 72.083% and won the Special with 71.480%, beating Hubertus Schmidt on his number one horse Wansuela Suerte.

36-year old Per Sandgaard has lived in Sweden for several years, where he worked with Peter Markne, but returned to Denmark this year. In the summer of 2001, he got Zancor in training and the bay gelding has stayed with him ever since. 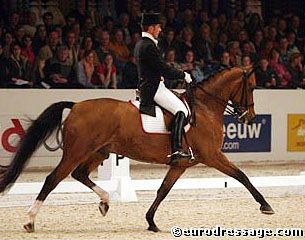 In three years time, the combination has transformed into an Olympic pair. "I'm unbelievably happy. I never even dared to dream of such thing, but when Jesper Frigast called me with the news, it all of a sudden became reality," Sandgaard said. "I will work together with Rudolf Zeilinger and decide which shows fit in my strategy for the Olympic Games."

Other Danish riders in the running for a team place are Fie Skarsoe, Natalie Zu Saeyn Wittgenstein, Lone Jorgensen, Jon Pedersen, Birgitte Byrialdsen and Michael Søgaard. The Danish riders have until June 30th to qualify for the team. There are three more shows left for them to score at: Achleiten, Rotterdam and Fritzens.