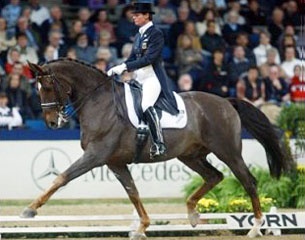 Ulla Salzgeber's doping woes are not yet over. Despite being sentenced by the FEI for administering doping to her horse Rusty, Salzgeber now also has to face the disciplinary commission of her own German Equestrian Federation (FN).

However, because not all evidence has been gathered in the case Rusty, the first Chamber of the FN Disciplinary Commission decided to postpone their decision, which will have consequences for Ulla Salzgeber on a national level.

The FN did not want to announce which exact evidence they are waiting for in the Rusty case. In an Olympic year this case deals with more than just a formality. Ulla Salzgeber could face severe obstructions in getting qualified for the 2004 Olympic Games depending on the commission's decision.

The German National Olympic Committee (NOK) has decided to refuse any candidate who is involved in a doping case, but the Rusty case is different. Because Ulla's vet, Dr. Stihl, was the person who administered the drugs to Rusty, Ulla is not fully and personally held responsible (according to the FEI). Ulla Salzgeber has always publicly opposed the usage of drugs. Furthermore, Dr. Stihl has proven that the overdose of the testosterone hormone has totally disappeared in Rusty's body. For the FEI the case is closed.

According to FN public spokesman Thomas Hartwig, the Second Chamber of the FN Disciplinary Commission will make her decision soon. A while ago, that same commission banned rider Hans Thorben Ruder from competition for one month and ordered him to pay a fee of 1,000 Euro. Traces of the medicine Flunixin were found in Thorben's horse at a competition in Bad Wildungen. A similar decision can be expected in Salzgeber's case.