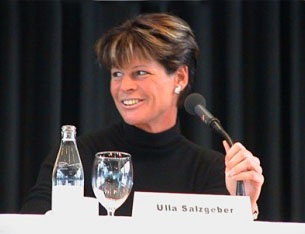 Rusty 47 was selected for sampling at CDI-W Final Göteborg (SWE) on 28 March 2003. Analysis of the urine and blood conducted by LAB, the FEI’s approved central laboratory, revealed the presence of Testosterone above the threshold level. A confirmatory analysis has not been requested.

Testosterone is the principal endogenous androgenic-anabolic steroid in horses and men. It is used for therapeutic purposes but can also be abused. Testosterone is a prohibited substance pursuant to Article 1013 and Annex IV of the Veterinary Regulations of the FEI.

The evidence revealed that 13 days before the start of CDI-W Final Göteborg, the Salzgeber’s veterinarian had administered Rusty 25 mg Testosterone Propionate to treat an assumed hormonal imbalance in Rusty that may have caused patchy hair loss. The veterinarian had not made this fact known to either the veterinarian of the German National Federation or to Ulla Salzgeber. The Judicial Committee accepts that Salzgeber did no know that Rusty 47 had undergone any treatment prior to the event.

The Judicial Committee is satisfied that the complete LAB reports supported by the evidence of the Director of the Drug Surveillance Group at HFL Newmarket reflect that the tests were accurately performed in an acceptable method and that the findings of LAB are accurate and show the presence of the prohibited substance, Testosterone, at a level which exceeds the threshold level for geldings of 20 ng/ml.

The Judicial Committee is also satisfied that the internationally acknowledged threshold levels for Testosterone in geldings and mares as established by the international racing authorities and adopted by the FEI Veterinary Committee for FEI events and included in the FEI Veterinary Regulations since 1988 are supported by analytical research and were not arbitrarily established.

The Judicial Committee determines that the various minor procedural irregularities highlighted by Salzgeber’s counsel cannot reasonably be considered to have affected the results of what is a valid test and should, therefore, only be taken into consideration in the determination of the sanctions and imposition of costs.

The Judicial Committee determines that Salzgeber has not taken any intentional action to deliberately affect the performance of the horse. Salzgeber had established a system that was supposed to make treatments transparent and disclosed. According to the Salzgeber's statements, her veterinarian has not followed such procedures in the present case. There is no evidence in this case that Salzgeber had actual knowledge of the treatment given to Rusty 47 by her veterinarian. There is also no evidence that Rusty received a specific competitive advantage as a result of the administration of the prohibited substance which – according to Salzgeber’s vet - was connected to a legitimate medical procedure.

Nevertheless, Salzgeber has failed to ensure that Rusty has no prohibited substances in its systems during an international event. Since this is a strict liability offense that does not require intent or even specific knowledge, Salzgeber did not comply with General Regulations Art. 146 and RUSTY 47 with its rider, Ulla Salzgeber, must be disqualified from the event and that all prizes and prize money won at the event must be forfeited in accordance with GR 174.7.1.

The FEI has a strict liability policy or no-fault system which means that no intention is required in order to establish a doping offence. The mere presence of a prohibited substance in the horse’s systems is sufficient. Additionally, The FEI is not required to demonstrate any competitive advantage to Salzgeber resulting from the presence of the drug. The intent and competitive advantage issues are only taken into consideration in the determination of the sanctions to be imposed. This system of strict liability has been reconfirmed time and again and it must prevail when sporting fairness to all competitors is at stake.

Under the FEI judicial system the competitor, as the person responsible, is responsible for all matters relating to his or her mount, including competing on horses which are “drug free”. It is similarly the responsibility of competitors to inform themselves of all substances fed or administered to horses which are destined for participation in international events and to ensure that such horses do not have any prohibited substances in their systems or that such treatments are disclosed prior to the start of the competition and authorized in advance.

Competitors should, therefore, seek information and should discuss all treatments with owners, veterinarians and other caretakers of all horses which are destined for participation in international events in order to avoid contravening FEI rules and regulations. Procedures aimed at ensuring that such information is fully disclosed must be established by all competitors and the expectation is that competitors that compete at the highest levels of the sport should have an established system that would prevent even an inadvertent unauthorized medication of a horse participating in international events.

The Judicial Committee does take into account the facts that Salzgeber did not have actual knowledge of the treatment, did establish a mechanism to learn ahead of international events regarding such treatments, did not clearly obtain competitive advantage, has a blameless record as an international rider and the hardship caused to the Salzgeber as a result of the delays and procedural mistakes and therefore determines that there should be no suspension in this case despite the type of drug and its grade. In accordance with General Regulations Art. 174.7.3 the Person Responsible is fined CHF 2,500.-

The Judicial Committee has taken into consideration the incomplete documentation initially provided to Salzgeber’s counsel and has limited the costs payable to the FEI by Salzgeber towards the costs of the judicial procedure, in accordance with General Regulations Art. 174.12, to CHF 1,000.-.

It should be emphasized that, in deciding against Salzgeberand imposing the penalties, the Judicial Committee is not claiming that Salzgeber knew about the treatment, authorized it or received any advantage as a result thereof. Therefore, Salzgeber's prominent reputation must stay unaffected. Nevertheless, this case should again emphasize the vital importance of medication control and the need for all caretakers to be conservative in their assessments and more importantly to report to Salzgeber all treatments and allow her to make the required determination whether to enter the horse in an international event or request an authorization to compete despite a prior treatment. This is the system established by the FEI which is aimed at establishing fair and equal conditions for competitors.

Salzgeber has 30 days to appeal the decision to the Court of Arbitration for Sports.