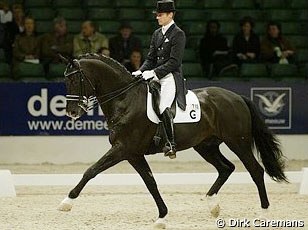 Not only Friedensfurst, but also Gribaldi and Michelangelo were proclaimed Elite Sire at the 2003 Trakehner Stallion Licensing in Neumunster, Germany, last weekend.

Paradoxically, the black Trakehner Gribaldi is one of the most used licensed stallion in the KWPN Studbook at the moment. The ten-year old Gribaldi was Licensing Champion in 1995 and owner Gestut Hamelschenburg sold him through the auction to the Dutch Joop van Uytert who has a stallion station in Heerewarden, The Netherlands. Gribaldi is by Kostolany out of Gondola (by Ibikus) and was bred by Marika Werner from Mittenaar, Germany. Gribaldi currently has three licensed sons: Distelzar, Hofrat and Hoftänzer and he scores 131 points on his breeding value (Zuchtwert). Gribaldi has been trained and competed by Edward Gal at Intermediaire I level and is also approved for the KWPN, Oldenburg, Selle Français and Danish warmblood studbook.

Third stallion receiving the Elite status this year is the renowned Michelangelo. Descending from foundation Trakehner bloodlines (Pasteur xx x Matador x Kosmos). Michelangelo's career as stud has had quite a few outstanding moments. Celebrated sons were presented at approvals in Germany, The Netherlands and Denmark. 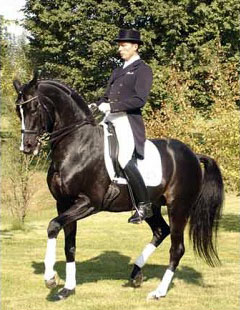 Also in 1998, Michelangelo produced the champion mare at the central inspections in The Netherlands. His daughter Schneeflocke, the highest priced auction mare in Neumünster, placed 4th in her age-group at the National Mare Show (all breeds) in Neustadt-Dosse, Germany. In 1999 the Michelangelo-son Hölderlin was approved and in 2000, his son Summertime was awarded a premium title at approval. Michelangelo is also the dam's sire of the Trakehner Grand Champion mare Lantana.

In 2001 the Oldenburg premium stallion Mon Dieux by Michelangelo was approved. Michelangelo scores 158 points on his Breeding Value, which is a score so far unsurpassed. Michelangelo is currently stationed at Gestut Werbelsgrund and ridden by Rolf Hartmann.