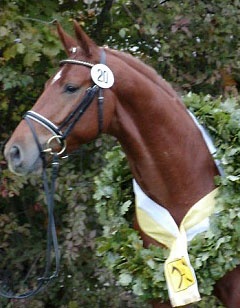 The 2003 edition of the Hanoverian Stallion Licensing was exciting, because the event was brimming with quality Hanoverian colts that received the chance to prove themselves of their value as a breeding sire of competition horse in the future.

One hundred colts were presented, 61 were approved and 16 received the premium label.

A chestnut Londonderry x Weltmeyer offspring took highest honours by being judged the best by the stallion commission. Proclaimed 2003 Hanoverian Licensing Champion, this colt (out of Walida) excelled in his suppleness and has a beautiful top line. The stallion, who is bred by Regine Sökeland and presented by Klaus Kamps, has been sold to Otto Rudolf Fuchs of Hilton Hanoverians in Virginia, U.S.A, for 130,000 Euro.

Reserve Champion was a De Niro x Weltmeyer son, who is bred by Walter Honigfort and presented by Heinrich Ramsbrock. Burkhard Bade, manager of the Celle Landsgestut, purchased the elegant black stallion for 127,000 Euro. Bade acquired seven stallions in total for the Celle State Stud. Amongst them are a Londonderry x Weltmeyer (175,000 Euro), a Rotspon x Lauries Crusador xx (82,000 Euro), a Sandro Hit x Bismarck (80,000 Euro) and a Waterford x Werther (45,000 Euro). 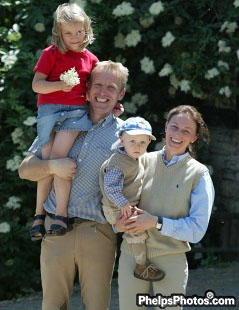 Overall, the auction of licensed and non-licensed stallions was a huge success. Top knock down price was 200,000 Euro for the Rohdiamant x Sao Paulo offspring, bred by J. Brinkmöller and presented by Johannes Westendarp. The stallion has found a new owner in Denmark. Westendarp is thrilled that his colt, which he picked out as a young foal, earned premium and has been sold to Denmark. The Rohdiamant get will probably stay with Westendarp until the Stallion Performance Test.

The best show jumping colt was the licensed Stakkato x Werther who was bred by A. Kamphorst. Gestut Sprehe bought the stallion for 85,000 Euro.

Nineteen licensed stallions in total were sold abroad. From 36 non licensed stallions auctioned, Gestut Sprehe purchased the most expensive one. For 104,000 Euro the black De Niro x Weltmeyer offspring, presented at the licensing by H. Schutt, will be going to Sprehe.