There is commotion going on in the German and international breeding world. Rumours have been spread that the Aachen based stallion stallion St Ludwig is closing its doors and selling all their stallions.

"These are just rumours spread by people who want to harm our business," Kraft said. 2002 was St Ludwig's most successful breeding year ever. "Our stallions dominated all competitions in breeding and sport. At breed shows, licensings and foal championships, we were always in front," Kraft added.

Although St Ludwig refutes the rumours, they have seriously reorganized their stallion stable in 2002 and sold several of their sires. St Ludwig wants to maintain a stallion stable of 10 sires and as each year newly approved sires are stationed with St Ludwig for breeding. They export some of their stock. 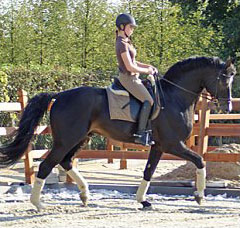 In 2002, St Ludwig sold their number one sire Donnerschlag (by Donnerhall) to Fairwind Farm in the U.S.A.

Aquilino. The Oldenburger stallion Aquilino was sold to Switzerland last year. The 9-year old Argentinus offspring is in training with his new owner, Eva Senn from Trimbach, Switzerland.

Akribori, the black Holsteiner stallion by Accord II x Laval I, was acquired by the Swedish national stud Flyinge and is currently being ridden by Susanne Gielen.