The Future for Coby van Baalen 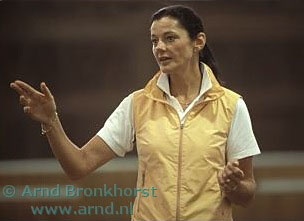 The new KNHS Dutch Dressage team selection commission selected Coby van Baalen for the A-team despite the fact that she no longer has a Grand Prix horse to ride.

The retirement of Olympic Ferro put Coby van Baalen on the sideline, and the Dutch equestrian magazine Hoefslag had a little chat with her about her future, which seems promising.

Van Baalen hopes to continue her carreer as a Dutch Grand Prix team member rider and to achieve this she will need to ressort to new horses. The Dutch Equestrian Federation (KNHS) granted Van Baalen six months to find a new suitable partner, otherwise she would be removed from the A-team. Van Baalen has received many opportunities to ride good horses, and has searched for new ones herself, but she admits that she's actually happy with how things are right now. "I have many young talented horses," she says, " and I am really enjoying teaching my students. This year I hope to produce students for the national pony, junior and young riders teams in Holland and Belgium." 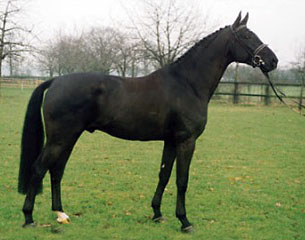 Van Baalen's current collection of horses includes the 6-year old stallion Weltino, who she got to ride through Johann Hinnemann (Weltino pictured left). She also has an own bred 6-year old black gelding Pasternac (Gribaldi x Cocktail x Zonneglans). Furthermore, Coby has been riding the 1999 Young Horse World Champion Roval Investment for one year and a half now and hopes to compete him at Prix St Georges level this year. Through her coach Johan Hinnemann, Coby has also received the ride of the Westfalian licensed stallion Donnerwind (Donnerschlag x Voltaire) who was previously ridden by the German young rider Jana Freund.