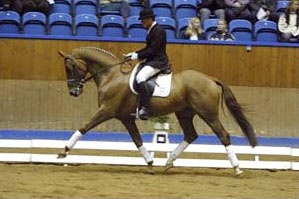 At the 2002 Danish Championships for Young Dressage Horses, Don, Matine and Hertug were the winners in the four, five and six-year old class. The Championships, which were held in the renowned Danish Equestrian Facility of Vilhelmsborg

-- the host stable of the 2001 World Cup Dressage Finals -- were a true spectacle for young horse enthusiasts.

In the four year old division, young horse master Morten Thomsen won the class with her Don by Donnergraf. Thomson, who has been an Olympic rider in 1988 at Seoul and in 2000 at Sidney, scored the highest with his licensed chestnut champion. Silver medal in that age class was for Jim Rasmussen and Broholms Highlight, a Danish bred horse by Midt-West Ibi-Light. The bronze went to Margit Ørum and the graded stallion Zardin Firfod by the Trakehner stallion Gribaldi. 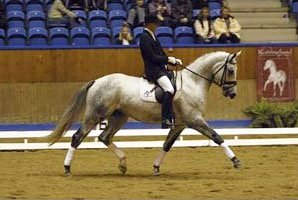 The best rider came from Blue Hors' team rider Lene Jervelund aboard the wonderful Blue Hors' Hertug. The Trakehner bred Hertug, by Schwadroneur, was already the champion as a four and five year old. Poul Fabricius-Bjerre and Capuccino D (by Carano) claimed silver, while Margrethe Skovmand and Solos Lacan (by Castro) took home the bronze. 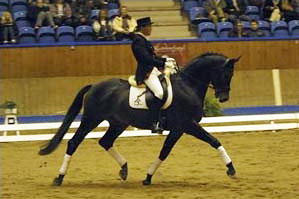