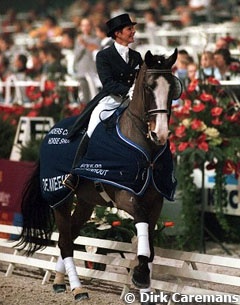 Domincan resident Yvonne Losos de Muniz has bought a triplet of Dutch bred horses over the past year in order to prepare herself optimally for the 2003 Pan American Games which are hosted in the Dominican Republic next year.

Muniz's most recent acquisition is Annemiek Vincourt-Krom's Joris. Sold through horse dealer Diederik Wigmans, Joris was broken, trained and shown by Vincourt herself (pictured). The 9-year old grey gelding by Uniform has reached his peak of Grand Prix capacities and would not improve any further, so a sale to the Dominican Republic was highly interesting.

Last year Yvonne Losos de Muniz already bought the KWPN gelding Lando Lee (by Cocktail) with whom she's competing Prix St Georges. Lando Lee was owned by Belgian amateur rider Koen Heeren and presented at the Belgian Young Horse Championships in 1998. The horse then went out of sight and only recently popped up competing in Florida during the 2002 Dressage at Florida show circuit.