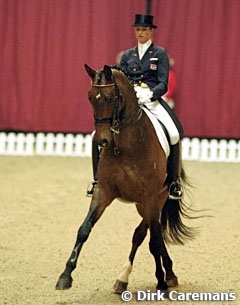 Three of the in total 15 finalists to compete in the World Cup Dressage Final, which will be held during the international show "Indoor Brabant", can not participate

: Gonnelien Rothenberger-Gordijn (Netherlands), had to withdraw because her horse Jonggor's Leonardo da Vinci is having heart problems after  an infection. Neil Ishoy's (Canada) horse is being troubled by an knee injury, and Malgorzata Morsztyn (Poland) did not give any reason.

Two other riders will take their place: Laura Conz (Italy) with Fibrin and Ingrid Klimke (Germany) with Nector van het Carelshof. Klimke is a very wellknown name in the dressage world. Her father, Reiner Klimke (who passed away in 1999) was one of the world's best dressage riders and competed in the World Cup Final in 1988 and 1995. Her brother Michael competed in the Final in 1990, 1991 and 1996.

Title holder in 's-Hertogenbosch is Germany's Ulla Salzgeber. Other wellknown competitors are compatriots Isabell Werth and Gina Capellmann-Lütkemeier, the Dane Lars Petersen, the Spanish Beatriz Ferrer-Salat and last but not least Arjen Teeuwissen from the Netherlands. The Final consists of two tests. The Kur to Music (the second part) will be held on Sunday March 24th, Followed by the Farewell Celebration of Olympic Champion Gestion Bonfire with Anky van Grunsven.