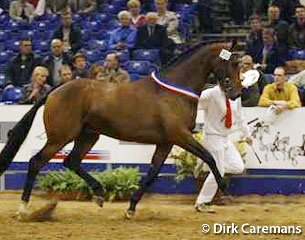 The youngster is by Houston out of Hedora (by Columbus x Makelaar). Symfonie was chosen champion amongst ten selected stallions for the title. Thirty stallions in total were appointed for the stallion performance test later this year.

Second place was good for the dapple grey stallion bred by J. Roelofzen-van Straaten. This show jumping talent is by Corland out of Joukje (by Derrick) and had 128 as catalog number. Third place went to another show jumping star, catalog number 289, a Heartbreaker x Oula Owl xx get, who was to be auctioned later that day.

The other stallions were ranked as follows: