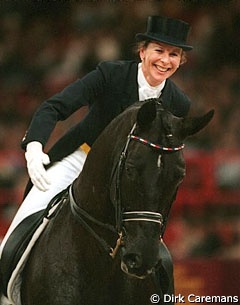 Last weekend of October 2001 was the time for the French Dressage Championships for Grand Prix riders at the National Equestrian Center of the Cadre Noir in Saumur, France.

The center already served as setting for the youth riders and young horse championships one month ago, but now the top level riders were assembled to battle for the national title. 12 entries were initially announced for the championships but Odile van Doorn (riding Paradie van de Wateringhoeve) and Hubert Perring (on Diabolo) did not show up.

Three riders were able to score above 70% in the Grand Prix, i.e. Marietta Almasy, Dominique D'Esme and Florence Lenzini. The same top three was formed by this trio in the Grand Prix special.

The judges favored Mariette Almasy, though, as 2001 French Dressage Champion. Riding Pest, the horse formerly known as Pavarotti, she showed the highest level of training and consistency in her test. The silver medal was for Dominique D'Esme on Prince Balou Thor and the bronze went to Florence Lenzini aboard Ravel.