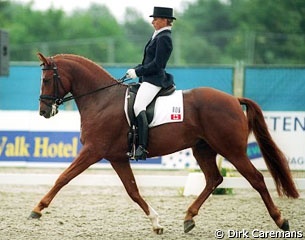 Dressage Canada is pleased to announce that five exceptional young horses have been nominated to represent Canada at the 2001 World Breeder's Championship for Dressage Horses.

The Championship will be held this year in Verden, Germany, from August 8 - 12.

In 2000, Canada was represented in this competition by Quantumtyme, an Oldenburg gelding ridden and owned by Evi Strasser, who finished fourth place in the world in the five-year-old division. Quantum Tyme leads the six-year-old group nominated for 2001, having achieved qualifying scores and high placings in the FEI Test for 6 year olds throughout 2001. Two other terrific young horses have also been nominated in the six year old division. Boticello 2, a six-year-old Hessen stallion, ridden by Leonie Bramall, had very good competition results in Germany, and Rebel Rockstar, a six-year-old Belgian warmblood gelding owned and ridden by Jon Costin, placed in the qualifying competitions.

In the five-year-old division, Canada has nominated two outstanding candidates. The first, Fortissimo, is a Hannoverian gelding owned by Alyson Carpenter and ridden by Tom Dvorak, who won the FEI Young Horse test at the CDI Batavia, recently held at Paxton Farms in Ohio. Oddessey, a Dutch warmblood stallion owned and ridden by Dana Hewett, is the second five-year-old representative. He had great competitive experience in the Netherlands, and was a top finisher in the 2000 PAVO Cup Final, which is a very prestigious competition for young horses. Oddessey was invited to compete for Holland in the 2001 FEI World Breeding Championship for Young Horses, and Dressage Canada is thrilled to have this excellent young stallion representing Canada.