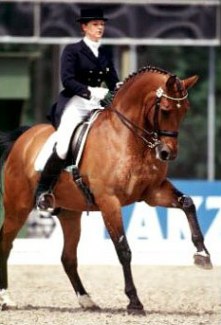 Senior Irish International rider, Anna Merveldt-Steffens from Ballymore Eustace, County Kildare, now based in Germany, is the winner of the prestigious "Irish Field" Dressage Rider of the Year award for the year 2000.

Anna had a very successful year on the international circuit which saw her move up 85 places in the world rankings to 52nd in a six month period, with good performances at Monza, Munich, Donaueschingen, Fritzens-Wattens and Stuttgart. A second place place in the Grand Prix Speciale at the Italian CDI with new horse Darius was followed by a string of top ten placings and her second horse Chablis placed fifth in the Kur at a rain sodden Fritzens Wattens in August. A month earlier Anna swept all before her to win the Bavarian Championships with Darius. She returned to international competition in May 2000 having taken 1999 off to have her son Phillip.

Over the last decade she has competed successfully at the highest level on the international circuit. Anna is the best dressage rider ever to come out of Ireland. She qualified for the last sixteen at the Barcelona Olympics in 1992 and ended up in eleventh place overall. She placed sixth at the World Equestrian Games in the Hague in 1994 and has won the Grand Prix Speciale at Frauenfeld CDI, Munich CDI, Rotterdam CDIO, Spangenberg CDI and Frankfurt CDI. Her trainer is Johann Hinnemann.

Anna adds another horse to her string in 2001 with the addition of the 13 year old Fosbury to join forces with her current duo Darius and Chablis. She will be back competing for Ireland on the international stage once again in the spring.