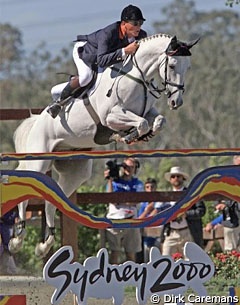 24 September 2000 - The 'working week' begins at the Sydney International Equestrian Centre on Monday with the first qualifying round for the individual showjumping competition in the Sydney 2000 Olympic Games.

Seventy-nine riders from 29 countries will walk the course created by designer Leopoldo PALACIOS (VEN) and co-designer John VALLANCE (AUS) at 9:00. During the course inspection, competitors decide how they will ride each fence and tackle the related distances between fences.

The first qualifying round of the individual showjumping competition begins at 10:30. This is the first of four qualifying sections that determine which riders will compete in the Individual Final on Sunday, 1 October.

Hot favourite for the individual showjumping gold medal is Brazilian rider Rodrigo PESSOA. Son of the legendary Nelson PESSOA, who is the Olympic showjumping coach for Saudi Arabia, Rodrigo PESSOA is the world champion and winner of three World Cups.

Individual silver and bronze medallists in Atlanta, Willi MELLIGER (SUI) and Alexandra LEDERMANN (FRA) partner the same horses that brought them success in 1996 and will be followed closely by the crowd.

All horses that were presented at the horse inspection on Sunday were passed fit to compete. Jozsef TURI (HUN) did not present his horse SUPERVILLE, leaving Hungary without a representative in the showjumping competition. Aside from the jumping competition, a horse inspection for the dressage horses begins at 11.00. The Ground Jury and FEI Veterinary Delegate will determine whether each horse is fit to compete. The horses are presented in alphabetical order of the countries.

The draw for the starting order begins at 14:00. It determines the time and day each rider competes in the Grand Prix-Team competition, that stretches over two days on Tuesday and Wednesday.

25 September 2000 -  The gold medal favourites got off to a disappointing start in Monday's first qualifying round for the show jumping final, as a rank outsider rode a near perfect round to share the lead. Riders were very critical of the show jumping surface, saying it was too slippery after heavy rain, and also said the near two-month lay-off from competition as a result of Australian quarantine requirements also affected some horse and rider combinations.

New Zealand's Bruce Goodin - rated outside the top 50 jumpers - and the Netherland's Jeroen Dubbeldam both had clean jumping rounds, incurring 0.50 penalty points each for exceeding the course time limit by less than two seconds, to lead the field.

Germany's Ludger Beerbaum, the gold medallist from Barcelona, was in third place on 1.25 penalty points, with Argentinian Martin Dopazo fourth on 2.25 penalties.

The top four were the only riders to make it through without knocking down any rails. However the competition is close, with the top 21 riders having only 8.0 penalties or less.

The fact it was a qualifying round reduced the urgency for riders to complete the course quickly, but the sight of the first horse and rider falling on the course and the slippery ground also contributed to the slow times.

"Imagine if this was a championship today, and we had a speed class where you had to go fast on the first day, I think we would have seen a catastrophe," Beerbaum said.

The highly fancied Rodrigo Pessoa of Brazil ended the first round in 11th position on 5.00 penalties, while Atlanta silver medallist Willi Melliger of the Netherlands was well back in 57th position after incurring 18 penalties.

"I'm not very happy," Melliger said. "I hope my horse will improve and I hope to qualify for the final."

Pessoa said he was not too concerned because if he finished in the top 45 after three rounds he would qualify for the final, where scores are reset.

"It's a funny competition because it counts, but it doesn't really count, and you have to go out and do the best you can but you're not really into the competition yet, you're not 100 percent motivated because it doesn't count for anything," he said.All 74 riders will participate in the second and third rounds on Thursday - which will also decide the team event medallists.

1 October 2000 - Jeroen Dubbeldam of the Netherlands won the gold medal for show jumping, emerging victorious in a three-way jump-off from his compatriot Albert Voorn and Khaled Al Eid of Saudi Arabia.

The jumping final was held over two rounds, with the penalties for both rounds added together to determine the winners. The three medallists were tied on four penalties, one knocked rail, at the end of regulation competition.

Dubbeldam knocked no rails down in the jump-off, while Voorn and Al Eid both knocked one. Voorn secured silver with a better time.

Fourth placed was covered by the Belgian Ludo Philippaerts on the Belgian warmblood RBG Ottorongo. His chestnut gelding knocked down one rail in each round. The German Otto Becker, Lars Nieberg, Marcus Ehning and the Brazilian Andre Johanpeter did the same thing and ended up fourth.

Brazilian Rodrigo Pessoa, the 1998 world champion and gold medal favourite, had a disastrous last round.

Riding last and needing a clear round to win gold, he knocked down a rail at the first jump and then his horse, Baloubet Du Rouet, refused to attempt the eighth jump and he was eliminated.