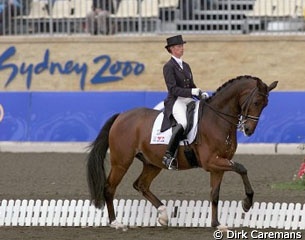 She finally did it, and luckily it happened on the last competition she rode with her number one. Anky van Grunsven won Olympic gold, a medal she has been craving for since the Games of Barcelona in 1992.

Even though Van Grunsven kept a healthy attitude towards her life-time rival Isabell Werth, it was obvious that her perennial number two position bothered her immensely. Never being able to beat Werth on Gigolo at any European competition, Gestion Olympic Bonfire (OLD,by Welt As x Praefectus xx) scored a world record 86% in his Olympic freestyle and received gold while Gigolo was only good for silver.

The 17-year-old, who still masters his exercises like the best, is showing signs of old age for a while now, especially in his weakest gait the walk. However, his elasticity never succumbed due to old age and the Oldenburg ballet dancer remained a joy to watch.

But, the story is finally over. Anky van Grunsven decided to retire her good old Bonfire after the Games. Two last appearances have been scheduled, before Bonfire will eternally retreat to his stable in Gemert, The Netherlands. After his flight back from Sydney, Bonfire was laureled on the market place of Anky's home town village. At the international indoor competition Jumping Indoor Maastricht (26th November), Bonfire will do his last ride before closing off his era.