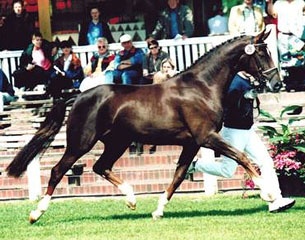 DONNA DORIA is the name of Oldenburg's year 2000 champion mare. The liver chestnut is a tremendous mover with the certain "Donnerhall-Coolness". Her fluent movements and her almost perfect conformation helped the 3-year-old

to win the Championships's title at the Oldenburg Premium Mare show held in Rastede Park on June 17, 2000.

DONNA DORIA is sired by Grand prix stallion Donnerschlag out of Fortuna by Rosenkavalier. Her breeder Harli Seifert from Bunnen, Germany,  is well known in the Oldenburg area for not selling any of their horses. But DONNA DORIA got sold as a filly at only 4 weeks of age. Owner Wilhelm Sieverding, a friend of the Seifert recalls the situation: "It took me four hours until I finally got this wonderful filly".

Harli Seifert is a stallion owner, her husband is an architect in Dusseldorf. She bred Franke Sloothaak's GIO GRANNO. Her Rohdiamant-son ROYAL RUBIN was one of the best movers of the 1999 Oldenburg stallion keuring and awarded premium stallion. Second in the so-called "brilliant-ring" was DIE WEINGARD, a black De Niro daughter with four white socks. Her dam is a full sister to Markus Beerbaum's LADY WEINGARD (Landadel x Weinstern). This mare is a  fantastic mover but appeared to be a little immature and could not display as much charm as DONNA DORIA.

Third was LADY RUBINA, a big chestnut by Lord Liberty G out of Rubica by
Castro. Owned and bred by "dressuur and springstal De Ijzeren Man" in Weert, The Netherlands. Again the trot was simply spectacular - interesting: Both parents, Lord Liberty G and Rubica were once purchased by Dutch horse tycoon Adrie Gordijan at the Vechta foal auction.

Next to come in the final rankings were WYOMING (Rubinstein x Brenatano II) and AMARENA (Silvio I x Grannus). 80 mares got the state premium title.