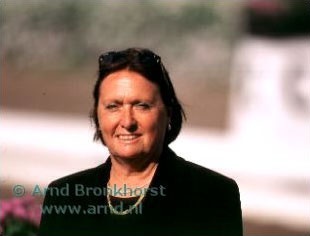 Olympic judge, clinician, chairwoman of the International Dressage Judges' Club, organizer of CDI Schoten and the Castles Classic Cup, stimulant behind the popularization of the Kur, president of the 1998 WEG judges' committee; there is only one woman behind this long list of realisations and that is Mariette Withages.

The 58 year old Belgian O-judge started her judging career at age 28 by filling in the vacancy of judge secretary. Rapidly moving into the position of secratary-general of the Union of Dressage Riders, she became a notable dressage judge in her home country Belgium. In 1973 the Royal Belgian Equestrian Federation gave her a Prix St Georges judging licence, and only three years later she followed courses for candidate international judges in the Swiss Elgg. In 1974 CDI Brussels was the first show of a large string of international competitions which led to an Olympic-status 15 years later.

Mariette Withages is continuously involved in the improvement of international dressage competition. The Kur to Music as a part of the World Cup finals was a product of her mind that had been developed in corporation with Dr Reiner Klimke and Herman Duckeck. Besides the training of novice judges, Mariette busies herself with a Belgian show circuit for Young Dressage Horses which was formerly sponsored by the German button company Nobilis.