1964 Tokyo Olympics: Marianne Fankhauser, the First Swiss Woman at the Olympics and Straight into the Medals 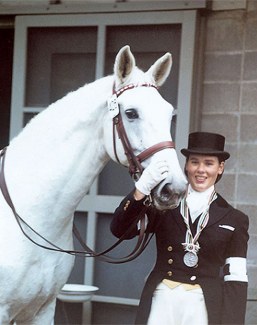 by Silke Rottermann for Eurodressage

This article is a continuation of 1964 Tokyo Olympics series
Part I: Team Competition in Jeopardy and Dangerous Travels to Tokyo by Air and Sea
Part II: Paul Weier on Pioneering Horse Transport to Tokyo, by Air,
Part III: Grete Kemper, Groom of Reiner Klimke's Dux, Remembers Tokyo
Part IV: "Joy, Fair Spark of the Gods" in Far Away Japan

Marianne Fankhauser (née Gossweiler) was the first woman on a Swiss Olympic team. She competed at the 1964 summer Olympic Games in Tokyo.  With her Holsteiner crossbred Stephan she successfully represented Switzerland at the 1964 and 1968 Olympic Games as well as the first World championships in dressage in 1966 in Berne. In her career she won two Olympic team medals.

In November 2020 she looked back on her first trip to the Olympics in an interview with Eurodressage's Silke Rottermann.

SR: Whereas nowadays competition horses are almost jet setters and fly several times per year, it was the first flight for the majority of horses who travelled to the 1964 Olympic Games in Tokyo. Was there any possibility to prepare the horses for this kind of transport?

MF: The horses had no real preparation because we could not do a trial flight  At the airport in Zürich our horses were lead onto a ramp and from there onto the plane. (editor's note: The British team actually did a trial flight before Tokyo)

SR: Which route to Tokyo was chosen and how long did it take?

MF: We departed on 7 October 1964 with stop-overs in Athens, Bahrain, Bombay, Rangoon and Hong Kong. The whole flight lasted 60 hours because we had a technical problem in Rangoon and had to wait many hours for the spare parts for our plane. Our horses had to stay on board all the time because there had been no possibility to unload them. On 10 October, the day of the opening ceremony, we finally reached our destination Tokyo. Horses and riders with swollen legs!

SR: Who took care of the horses during this long flight?

MF: Riders and grooms flew on board of the same machine so we took care of the horses in shifts.

SR: How long was the time to recover and acclimatise for the horses?

MF: There was neither recovery time nor real acclimatisation. We had to continue training immediately after our arrival, but first some easy days, but after three days we restarted the normal work.

SR: How long did the horses have to go into quarantine and where was it? Did you have the possibility to exercise your horses in quarantine?

MF: After our arrival the Swiss horses were stabled in the quarantine stables because the officials were suspicious that our horses would not be healthy after our delayed arrival, but we were allowed to ride. On the fourth day the vet, who was responsible for the French horses, checked the horses. For that purpose the big sandy race-track of about 1500 m length was used. By order of the vet we had to canter our horses one round in a fresh canter which probably looked a bit funny to us dressage riders with our long stirrups. My team mates Henri Chammartin, Gustav Fischer and I enjoyed it and cantered side by side. Probably unthinkable today. Afterwards the respiration rate and pulse were checked and the vet was amazed how well trained our horses were, the fitness level about the same like those of our jumping horses. All were declared fit.
I have to add that Henri Chammartin was very lucky that on this occasion he rode his number one horse Wolfdietrich and not Woermann on whom he later won. Because with Woermann he probably would have had trouble staying in the saddle (MF jokes). Soon we were cleared and allowed to leave the quarantine stables.

SR: How were the training facilities and stables in 1964?

MF: The stables were normal, nothing special, but absolutely sufficed. To train we had a big sandy arena and between beautiful trees a big grassy paddock which was turned into a dressage arena. It was pretty romantic and good enough to train for the about 25 riders there.

SR: In Tokyo Olympic dressage was still ridden on grass and it rained on the day of the Grand Prix. Did this influence the rides and did the riders adapt to those conditions, for example in the extensions or when going through corners?

MF: We got used to being surprised by heavy rain-showers there every day. However, our dressage horses were used to performing on grass. And it was only one rider during whose ride the rain was really horrific and this was with Josef Neckermann and Antoinette. But it was not possible to interrupt his ride. He took it as a sportsman.

SR: Women were first allowed in Olympic dressage in Helsinki in 1952, in Tokyo there were 8 of 22 starters female. You were the only one winning a medal (team silver). This was well noticed in your own country as you also had been the first Swiss woman ever at the summer Olympics. Did your success have any effect on dressage in Switzerland?

MF: It is true that our medals did not only delight people interested in sport. The interest, attention and delight were really big in Switzerland. But I doubt it had any influence of my sport at home. Dressage riding was and remained for more years, maybe with the exception of Switzerland, a "wall-flower" and there wasn’t the money and the time. I was just lucky that my father was a horse dealer and it didn’t matter if there was one more horse in his stables that was my private one.

SR: With Olympic dressage returning to Tokyo in 2021, what do you think will be the most striking change compared to 1964?

MF: If I only had to mention the most striking ones, I would have to write a book. I think my interview shows the changes. Everything in dressage has changed 200%, up to the smallest detail.