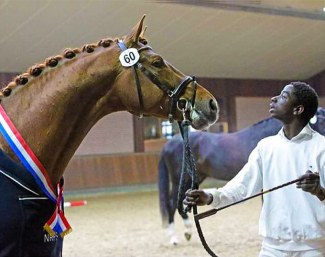 The KWPN bred S'Next Generation was named the champion of the 2021 NRPS Stallion Licensing in Lunteren, The Netherlands, on 3 April 2021.

It was the 40th edition of the NRPS Stallion Licensing.

Fifteen dressage bred colts were licensed of the sixteen that were selected to appear on 3 April. Many of the stallions received a new name, as their original Dutch (KWPN) name was dropped for an NRPS licensed stallion now.

The champion of the licensed is S'Next Generation, who was originally named Next Generation (by Secret x Vitalis). He is bred by Frank Moorman. and owned by Wilma Wernsen in partnership with Deejay Horses.

The reserve champion is First No Nonsense R (by Furstenball x Olivia), bred and owned by P. Remmits. His original name was No Nonsense R.