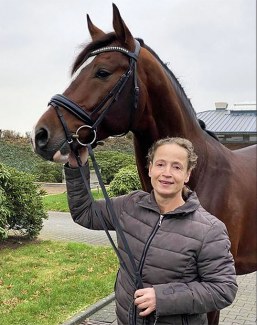 Bred by Norbert Frings and owned by the Holsteiner Verband Hengsthaltungs GmbH, Clarksville placed third in the premium ring at the 2016 Holsteiner Stallion Licensing. He did his Stallion Performance Test in Schlieckau in 2017 and scored 8.48 with a whopping 9.28 for show jumping and a high 8.38 for dressage. In his 2018 sport test he scored 8.21 points.

Clarksville was first competed in the riding horse tests under Kornelia Kindermann and won the 2017 Holsteiner Young Horse Championships as a 3-year old. Because Kindermann sustained an injury, Mareike Peckholz took over the ride and rode him to the 4-year old title at the Holsteiner Young Horse Championships in Bad Segeburg. They were 10th in the qualifier for the finals for 4-year old stallions at the 2018 Bundeschampionate in Warendorf.

In 2019 he was pulled from stud duties as he hadn't fulfilled his sport test requirements yet, but ended up completing them in October 2019 with a 50-day test in Schlieckau, where he scored 8.14 points. He did not compete that year.

Focus on Dressage instead of Jumping

In 2020 Kimberly-Elisabeth Hinrichs showed him up to M-level in dressage.

Norbert Boley, manager of the Holsteiner stud in Elmshorn, has decided to fully focus Clarksville on his dressage talents and sent the horse to the World No 1, Isabell Werth, to find out if the long legged and beautifully moving bay has FEI potential.

"Kimberly did good work on Clarksville and developed him according to his age to M-level victories," Boley said in a press release.  The winter months Clarksville will spend with Werth. "In a few months we'll see how we'll continue. It depends on how the stallion develops himself as a dressage horse."