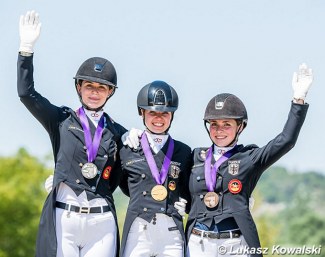 German Anna Middelberg showed how it is done to win individual gold at the 2020 European Junior Riders Championships. With a polished ride she swept the board in the individual test and led the German whitewash as team mates Valentina Pistern and Jana Lang joined her on the podium.

Riding in tropical temperatures, the second group of individual test rode in the morning of Thursday 13 August 2020. Because the FEI allows an order of go, based on the reversed ranking in the team championship test, the best riders were grouped together in a favourable position of riding towards the end of the class.

German junior team routinier Anna Middelberg is having her shining career moment in Budapest aboard the 9-year old Oldenburg gelding Blickfang HC (by Belissimo M x Brentano II). After winning the team test and team gold medal on Tuesday, she rode the individual test as the hot favourite for gold.

With nerves of steel the pair lived up to the expectations and gave a masterclass of what junior level rider should look like: the celebration of good training of rider and horse. The junior rider needs to have an independent seat, the hands steady with the thumbs up and maintaining a light, correct bridle contact. This is the basis of good riding and the goal of European Youth championships. Only when these conditions are fulfilled, first, the icing on the cake can be a high class, big moving horse that shines not only through correct training but also in its quality of gaits.

Middelberg and Blickfang showed very smooth, controlled trot extensions, fluent and easy trot work. There was no struggling, no rider laboring in the saddle to be seen. The horse was very consistent in the head position, soft and foaming in the contact. There was a nice stretch into the contact when the rein was given, even though the trot became a bit flat and unengaged. Only in walk, the pair hit a stumbling block as the liver chestnut became slow in the collection and lost the clarity of rhythm. Before and after the turn on the haunches he ambled. The judges scored the walk between 5.0 and 7.0. The extended walk was very nice although Blickfang could have dropped a bit more in the poll to stretch over the back. The canter work was effortless with lovely flying changes that were uphill and expressive in the fore arm. Only the last one could have been straighter in the body. Both the halt at entry and end halt were not immobile.

"I can't believe it," said a thrilled Middelberg. German team trainer Hans-Heinrich Meyer zu Strohen rung in. "Both reach a peak form. We are very happy that she was able to presentherself in such an exceptional way and that the judges rewarded it."

Valentina Pistner, From Off Day to Silver

German Valentina Pistner did not have the dream start to her 2020 European Championships she had hoped for. In the team championship test, her long-time partner 12-year old Oldenburg gelding QC Flamboyant (by Fidertanz x De Niro) was against the aids and behind the bit which led to a very difficult ride that could be compared to a leg day at the gym. Pistner later stated that her gelding had thrown the tongue over the bit as the reason for their off-day, but she stayed optimistic and was out for a come back.

Valentina was true to her word and as first starter of the day at 8 AM, she gave it her all. Her tall black gelding Flamboyant lives up up his name and has flamboyant gaits for sure. He has huge scope in the extended trot, but pulled on the bridle in the first extension and was not entirely regular in front. He stretched well into the contact when given the rein. He showed much cadence and ground cover in trot, also in the traversal movements. Also his walk his quality, with ok turns on the haunches, but he was given the rein early to the marker before turning on the diagonal for the extended walk, which showed massive reach. In canter the pair executed three straight flying changes that were up in withers, only the last one was crooked to the left in the hindquarters. Overall Flamboyant impresses with his big movement, but the ride should have been more neat and easy looking. There was just a little too much steering and piloting happening in the saddle today.

Pistner is a seasoned face on the international junior scene. Riding her third Europeans on Flamboyant, she has scored two individual silver medal in 2018 and two individual bronze in 2019. The judges were willing to reward her with a third silver as they scored the test no less than 73.912%. 74.853% was the high score and 72.794% the low score.

"This horse & team is all I can wish for," Pistner said after winning silver.

German Jana Lang has found her match in the 14-year old Dutch warmblood gelding Baron (by Johnson x Krack C). After being the overnight leader in the team test and then claiming team gold and second place at the end of that class, she certainly was one to watch in the individual test.

Baron is a very typical Johnson offspring, with special articulation in his hindlegs, seen regularly in Johnson get. The bay was trained to Grand Prix level by Swiss Jasmine Sanche-Burger but disappeared from the show scene for five years to return as Jana's junior ride.

In the individual test Baron appeared engaged, willing to work and forward thinking with his rider. The halt at entry was square, the final halt not entirely immobile. The extended trots were ground covering, but there could have been more elasticity in the back and more bending in the corners.  The horse seemed a bit mouthy with the contact on the left slightly stronger. The shoulder-ins were ridden in an expansive way, the one to the right almost on five tracks. The collection in walk on the right lead was better than on the left, but the extended walk was really nice with a very  clear 4-beat rhythm. The canter work was secure with good half passes, safe flying changes through the body, but in the simple change there was an abrupt transition to walk with a double beat behind.

Heiden Misses Out on a Medal

Dutch Robin Heiden and her home bred 9-year old KWPN gelding Gasmonkey (by Tuschinski x Ferro) were well on their way to a medal, but some small imperfections in the canter work made them drop to fourth place.

Gasmonkey is a bit of leg mover with a sunken back, but Heiden presented him very nicely with a quiet arm and hand position in trot, even though she leans a bit backwards with her seat at times. Especially in trot it appeared very relaxed riding. Despite from a bit of tilting in the half volte right, Gasmonkey showed a very smooth, regular rhythm in trot, easily transitioning between the collected and extended walk and lateral movements. His nose stayed too tucked in when he was given the rein on the half circle. The dark bay showed a lovely extended walk with a very clear 4-beat rhythm that had a good V-moment. In the last collected walk part he became mouthy and this meddled with the canter strike off. In canter the horse showed shorter flying changes to the right, but there were no errors. The canter strike off in the simple change was also short. They finished with a nice square halt.

"It was a beautiful test with a lot of harmony and ease," said Dutch team trainer Monique Peutz. "In trot the combination scores with swing and looseness. A few small mistakes are a pity as it lost them a medal, but the feeling of happiness with a beautiful fourth place prevails."

Denmark won silver in the team championship competition and Frederikke Gram Jacobsen came the fore as the highest scoring Dane both in the team test and individual.

The pair entered and produced a square halt but the horse stood wide. While Jacobsen rode the trot tour very smoothy with a good tempo and rhythm, Zafina is not so elastic in the ribcage there was a lack of proper bending on the left volte and in the corners. The half passes, however, were very nice. The compact bay mare lost a bit of her expression in trot in the given rein, but she stretched nicely forward. The extended walk had good overstep, but the mare could have lengthened a bit more in the frame. The collected walk was nicely ridden, the extended walk could have striden more to gain more overstep. The turns on the haunches were well executed. Zafina excels in her very pretty flying changes, which were straight in the body and uphill.

No less than eleven combinations scored 70% or higher.

Alexander Yde Helgstrand, the 2019 European Pony Champion, made a seamless transition to junior level and straight away on the Danish team. Aboard the 15-year old Danish mare Grevens Sa Va (by Soprano x Romancier). He showed a good square halt at entry, expressive extended trots and there was a fluent rhythm in the shoulder-ins, half voltes and half passes. The mare did not stretch enough into the contact when the rein was given and overall she was too hand-held. It would have been nice to see her in a lighter contact, off the hand, and with more self carriage. Also the collected walk was too free and not collected at all, but the extended walk was very good with two hooves overtrack and the nose reaching forward. The flying change were secure, but she jogged a bit in the transition in the simple change. The pair scored 71.412% to finish 6th.

France finished in a historic fourth place in the team competition and qualified no less than two pairs for the kur to music finals through the individual test. The French anchor became Mathilde Juglaret and the 8-year old Lusitano mare Caporal de Massa (by Rieto x Xaqiero). The grey stallion showed much athleticism in trot with good ground cover in the lengthenings and traversal movements. The flying changes all worked, only the balance in the half passes could have been a bit better. They scored a wonderful 71.264% and landed 7th place!

The best 18 pairs (three per nation) qualified for the Kur to Music finals on Friday afternoon 14 August 2020.