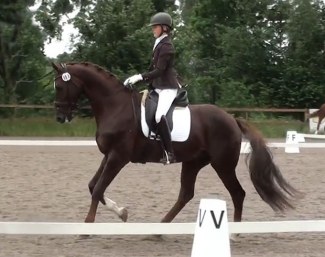 The 15-year old Hanoverian and Swedish warmblood licensed stallion Firenze has returned to the competition arena with Swedish junior Petra Lind after a five year break from showing.

Firenze is a 2005 born Hanoverian stallion by Florestan out of Dorina (by Donnerhall x Aarking xx x Bumerang). He is bred by Dieter Duis and now owned by Carina Forsén.

Firenze was licensed at the 2007 Hanoverian stallion licensing in Verden and did his 30-day stallion performance test in Neustadt/Dosse in October 2008. He scored 8.31 for dressage and 8.07 for show jumping to finish on a total of 8.32 points.

Firenze bred only very little in Germany, just in 2008, and has just three offspring registered for sport in the country.

Firenze sold to Swedes Eva and Per Pileryd at the end of 2008 and started a new life in Sweden.

He was licensed for the Swedish warmblood society as a 4-year old after his performance test in Flyinge in February 2009.

He was first competed in Sweden in 2012 by Stephanie Wretmo. In 2013 Anna Svanberg took over the ride. In 2015 he appeared at shows under Sofie Lexner. His last competition start was in 2015 at the Falsterbo Horse Show.

As a breeding stallion, Firenze was quite popular and has 185 registered offspring in Sweden. Between 2009 and 2019 he has covered around 20 to 45 mares a year.

Between 2015 and 2020, Firenze disappeared from the show scene for five years.

In 2016 Carina Forsén purchased Firenze from Per Pileryd and sent the horse to Germany to go in training with Camilla Grimschöld Kohtz.

She schooled him to Grand Prix level and in 2019 the horse returned to Sweden. Since October 2019, Petra Lind has been riding the stallion.

The pair made its show debut at the regional show at Perstorps riding club, where they scored 62.024%. At their second competition at the Frosta riding club on 5 July 2020 they won the class.

"Firenze got educated up to Grand Prix in Germany. When I got took over the reins he had not been competing for five years," Lind told Eurodressage. "This weekend we rode our second start on 73,214% in Medium dressage. We are striving for the Young Rider classes and then we will see."

Lind is trained by her mother and Marc André Wéry and gets also coaching from Swedish Grand Prix chef d'equipe Bo Jenå.

"I am currently qualified for Under 25 Grand Prix with my mother's GP horse Was Guckst Du (by), that she educated herself," said Petra. "I see my future in the sport of dressage and I am selected for a talent programme created by the Swedish Equestrian Federation."