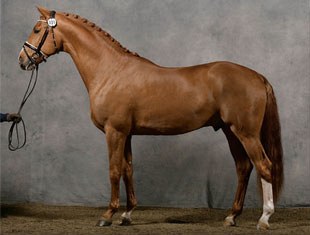 Three, four, and five-year old stallions from several breed societies in Europe were up for inspection to be approved by the Swedish warmblood society. The three highlights of this year's testing were the 3-year old JJ Rayban, the 4-year old Damino SD and the 5-year old Dalwhinnie.

Nineteen young horses in total were approved of which seven were dressage stallions. Members of the licensing committee are Christina Olsson (chairman), Elisabeth Lundholm and Jan Ove Olsson  (gaits) Leif Nilsson and Maria Gretzer in jumping. The guest judges were Reinhard Baumgart (Dressage) and Rob Ehrens (Jumping). The Swedish Stallion Testing is defferent from other countries, as it lasts for nine days and the criteria differ per age category.

The chestnut colt Damino SD is by Don Romantic out of Amina (by Amiral x Stanford) and is bred and owned by Stable Damino and ASA Dressage. He's a Swedish warmblood branded colt. He is ridden by Ann Sofie Antonsson and was praised for the clarity of his gaits. Especially in the walk and canter the stallion was described as very talented. Damino scored 9 for type, 9 for head, 8 for legs, 9 for walk, 8 for trot and 9 for canter.

The most popular stallion with the guest judge riders was Santiago. Germans Hella Kuntz and Heiner Sudowe test rode all stallions and liked Santiago the most. Sudowe gave the stallion a 10, Kuntz a 9. Another high scoring horse was dark bay colt Dalwhinnie (by De Niro x Rohdiamant). Kuntz and Sudowe both gave him a 9. The second highest ranked stallion was Zamboucca which scored an 8 twice. The Lauries Crusador xx son Leon also achieved 9's from Sudowe and 8's from Kuntz.

Damino SD's handler Jörgen Folkesson won the prize for best handling job. The KWPN stallion Lingh appeared under Mattias Jansson, and not under Edward Gal as was previously announced. Lingh was of course accepted by the Swedish Warmblood society and will stand at stud in Flyinge for 2009.

The approved dressage bred stallions are:

Approved for their performance: