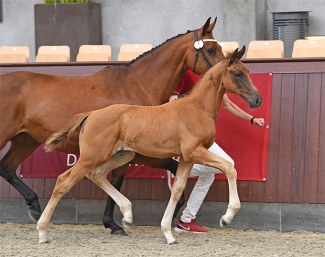 Eighteen dressage bred and four jumper bred foals were sold in this online auction that was streamed online.

"It is an exceptional colt that we were determined to ensure at Blue Hors, so we are thrilled that we succeeded," said Blue Hors breeding director Martin Klavsen.

The second most expensive foal was the filly Sevilla Pilekaer (by Vitalis x Apache) which sold for 20,000 euro to Danish Grand Prix rider Nanna Skodborg Merrald.

"We have had a considerable number of online bids, including bids from many new bidders from many different countries. It has proven that with this concept we reach more people as the online platform provides access to a wider network of buyers. Therefore, it is not unlikely that a similar concept will be integrated into future auctions. At least we can conclude that this test run was a success," said Ulrik Kristensen, Chairman of the Danish Warmblood Auction Committee.